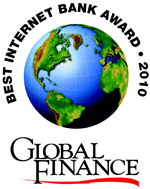 Representatives of most of the first-round winners of Global Finance 's World's Best Internet Banks awards came together on November 2 at the Harvard Club in New York for the eighth annual Best Internet Banks award ceremony. The Round 1 winners were announced in the September 2010 issue and Round 2 winners were announced that night. Citi won the overall global award, and HSBC and Citi took top honors in the Consumer category and the Corporate/Institutional category, respectively.