SAFEST BANKS IN THE MIDDLE EAST 2012 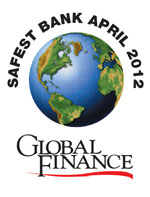 NEW YORK, March 1, 2012 — Global Finance magazine ( GFmag.com ) has named the top 10 “Safest Banks in the Middle East: April 2012” in an exclusive survey to be published in the April 2012 issue. The banks were selected through a comparison of the long-term credit ratings and total assets of the largest banks. Ratings from Moody’s, Standard & Poor’s and Fitch were used.

The full report covers the safest banks in Western Europe, Central and Eastern Europe, Asia, the Middle East, North America, Latin America and Australasia. “More than ever, customers around the world are viewing long-term creditworthiness as the key feature of the banks with which they do business,” says Joseph D. Giarraputo, publisher of Global Finance . “These banks have solid capital positions and superior risk management capabilities.”