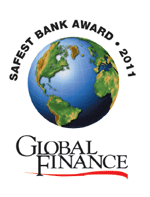 NEW YORK, November 3, 2011 — Global Finance magazine ( GFmag.com ) has named the top 10 “Safest Emerging Market Banks in Asia” in an exclusive survey to be published in the December 2011 issue. The banks were selected through a comparison of the long-term credit ratings and total assets of the largest banks. Ratings from Moody’s, Standard & Poor’s and Fitch were used. The rankings clearly show the ever-growing dominance of China’s banks both within Asia and throughout the emerging markets.