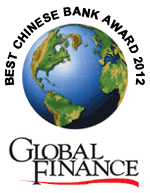 NEW YORK, September 24, 2012 – FOR IMMEDIATE RELEASE – Global Finance has announced its editor’s selections for the best banks and companies in China. The full list is below. A report and the list will appear in the November issue of the magazine. An award ceremony to honor the winners will be conducted in Beijing in early November 2012.

“China’s banking system and companies are working to become world-class” said Global Finance publisher Joseph Giarraputo, “The banks and companies we have selected are definitely leading the way for all others.”

The Stars of China awards were selected in the following areas: