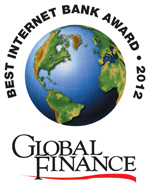 
Global Finance ’s World Best Internet Bank Awards are based on submissions from banks that wish to be considered. This year, 220 individual banks from around the world entered the competition. Representatives from Infosys comprised the judging panel. Based on the judges’ evaluations, Global Finance ’s editors made the final selections.


Winners were selected based on strength of strategy for attracting and servicing online customers, success in getting clients to use web offerings, growth of online customer base, breadth of products offered, evidence of tangible benefits gained from internet initiatives, and web site design and functionality. Sub-category winners were selected on the basis of relative strength of those products and services.