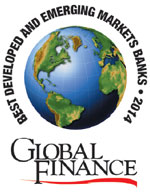 New York, March 18, 2014 - Global Finance magazine has announced its annual awards for the World’s Best Banks in Developed and Emerging Markets. The list of regional winners follows below. A full report on all the selections will appear in the May issue of Global Finance .

This is the twenty-first year that the magazine has selected top banks by country and region. The report covers best banks in North America, Western Europe, the Nordic Region, Central & Eastern Europe, Latin America, Asia-Pacific, the Middle East and Africa. In addition, this year, for the first time, Global Finance has also named the Best Regional Banks in the US.

The editors of Global Finance made the selections after extensive consultations with corporate financial executives, bankers, and analysts throughout the world. In selecting these top banks, editors considered factors that range from the quantitative objective to the informed subjective. In addition, for the first time, a poll of Global Finance ’s corporate readership was conducted in order to increase the accuracy and reliability of the results.

Criteria for choosing the winners included growth in assets, profitability, strategic relationships, customer service, competitive pricing and innovative products. Subjective criteria included the opinions of equity analysts, credit rating analysts, banking consultants and others involved in the industry. The mix of these factors yields leading banks that may not be the largest, the oldest or the most diversified in a given region, but rather the best—the banks with which companies around the world would most likely want to do business.

“The banks that Global Finance is honoring set themselves apart by anticipating and responding to the specific needs of their customers, which vary greatly from country to country and region to region,” said Joseph D. Giarraputo, publisher and editorial director of Global Finance . “With the recovery from the financial crisis moving along slowly, these banks have performed the best under very difficult conditions.” 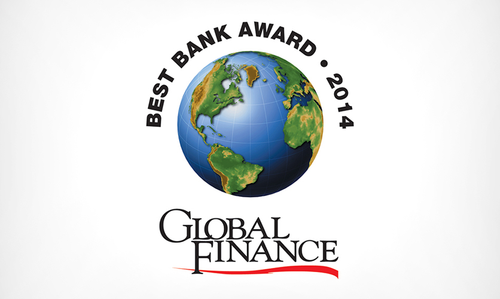