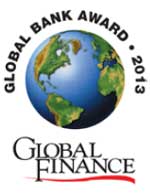 The World’s Best Banks report will be featured in Global Finance’s October issue and will have extra distribution in Washington, DC at the Annual Meetings of the World Bank and IMF where Global Finance is official media sponsor for the IMF Meetings Seminars.

Winners were selected based on performance over the past year and other subjective criteria including reputation and management excellence. Global Finance made the selections after extensive consultations with bankers, corporate financial executives and analysts throughout the world.

“We recognize these banks for their outstanding accomplishments,” says Global Finance’s publisher, Joseph D. Giarraputo. “In trying times, the winning banks were all noteworthy in their dedication to satisfying their customers’ needs.”

The World’s Best Banks and other Global Finance 2013 award winners will be honored at Awards Ceremonies in Dubai on September 18 during the SIBOS conference and in Washington, DC on October 12 during the IMF/World Bank Annual Meetings.