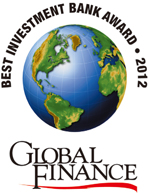 NEW YORK, February 17, 2012 — Global Finance announces the winners of the World's Best Investment Banks 2012 Awards, to be published in its April 2012 issue.

"The definition of success in investment banking became more complicated in the frenetic markets of last year," said Joseph D. Giarraputo, publisher of Global Finance . In a year when investment banks generally redefined success as "survival", simply being able to raise equity or debt capital at all, or just being able to prevent an M&A deal from falling through, became recognized as the overarching mark of success.

An Awards Ceremony for all winners will be conducted at the same time as the World Bank/IMF Meetings on the morning of Saturday October 13, 2012 at the Foreign Correspondents' Club in Tokyo, Japan.