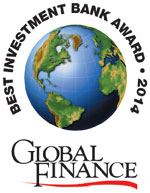 New York, February 25, 2014 - Global Finance magazine has named the World’s Best Investment Banks by country, region and sector in an exclusive survey to be published in the Aprill 2014 issue.

Bank of America Merrill Lynch was honored as the best investment bank in the world for 2014.

The past year saw investment banks restructuring and streamlining to focus on core competencies. Restructuring was—and continues to be—an essential step in both dealing with complex new regulatory regimes, under Basel III, Dodd-Frank and EMIR, and increasing return on equity.

“Those banks that excel in this market have focused on controlling costs, managing regulatory developments—and employing technology to further both of these goals,” said Joseph D. Giarraputo, publisher and editorial director of Global Finance .

AWARDS CEREMONY - An Awards Ceremony for all winners will be conducted the morning of October 11, 2014, at The National Press Club in Washington DC.