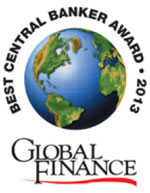 New York, August 22, 2013 - Global Finance magazine has named the heads of the central banks of Malaysia, the Philippines and Taiwan as the World’s Best Central Bankers over the past year, in recognition of their achievement of an “A” rating on Global Finance ’s Central Banker Report Cards. In addition, the central bankers of Chile and the European Union earned “A-” ratings.

The Central Banker Report Cards, published annually by Global Finance since 1994, grades central bank governors of more than 50 key countries (and the European Union) on an “A” to “F” scale for success in areas such as inflation control, economic growth goals, currency stability and interest rate management. (“A” represents an excellent performance down through “F” for outright failure.) Subjective criteria also apply.

Global Finance publisher Joseph Giarraputo notes: “As developed economies begin the gradual route to recovery and some of the largest emerging markets continue to slow, the world’s central bankers face a challenging time in managing monetary policy to positively influence economic stability and growth. Every year, we assess the determination of central bankers to stand up to political interference and their efforts at influencing their governments on such issues as spending and economic openness to foreign investment and financial services.“

*Central Bank governor was graded in 2012, however a different governor held the office.
**New country addition to the Central Bank Report Cards in 2013, therefore no grade was given in 2012.