Although the shares are still closely held by erstwhile members, there is a strong appetite from nonmember retail investors and institutional investors to own shares in the exchange.

The continent's trade finance needs are expected to increase as the implementation of the African Continental Free Trade Area agreement begins. 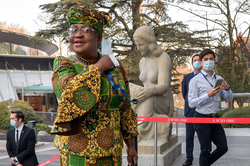 The World Trade Organization gets its first woman and first African leader.

These banks provided financial support and more­—for their employees, their clients and their countries.

Nigeria faces leadership, institutional and security challenges to building a sustainable economy. But first, it must break out of its second recession in four years.

With an election looming, Ghana’s economy grapples with a pandemic, falling oil revenues, a nagging fiscal deficit and the imperative to diversify.

Will a brutal decline in the Naira force the country to finally end its multiple-exchange-rate system?

Nigeria's central bank is trying to get the private sector moving.

Ghana has been one of Africa’s star performers, boosted by expanding oil production. But currency volatility, foreign-investor jitters and an upcoming election pose challenges.

Telecoms and traditional banks are being lured by a new system meant to give all Nigerians access to financial services.

Poverty in Nigeria is growing and two presidential candidates have vastly different approaches to tackling the country's problems.

Telecoms are moving into banking in Nigeria.

Much of Africa is underbanked and Nigeria is determined to do something about it.

Ugochukwu Nwaghodoh, group CFO of United Bank for Africa, speaks with Global Finance about how the continent’s youthful populations have rapidly embraced digital technology, and the vast market opportunities that remain.

Given the continent’s large youth population, the future of banking is digital. But who will win the battle for clicks over bricks? The incumbent banks—or fintechs and telcos?

One of Africa’s largest economies is trying to stay afloat in the face of growing challenges.

Even as General Electric looks to overhaul its business by selling assets and cutting back on capital expenditure, it is stepping up its investment in Africa—Nigeria in particular.

After 37 years of autocratic rule under former President Robert Mugabe, Zimbabwe has been left broke.  Rebuilding promises to be a long, costly and tough process.

Patrick Akinwuntan, group executive director of Ecobank Transnational, explains the bank’s plans to use mobile technology to vastly expand its customer base in the 33  African countries in which it operates

African financial institutions are tapping into technology to expand and consolidate as the banking sector matures.

With its currency battered and government revenue down to historic lows, Angola, Africa’s largest oil producer, must now address the fundamental causes of its macroeconomic imbalances.

With each country responding differently to the commodities crash, Africa showcases a range of mitigating efforts, with varying success.

No longer just a buzzword bandied about by politicians, diversification is now seen as a key to the future of Africa’s biggest economy, as sinking oil prices have eroded government revenue.

In the wake of falling commodities prices, Africa’s largest and oil-rich economies are now in damage-repair mode.

Emerging nations are replacing the Americas as the continent’s largest trading partners.

African nations can no longer get by on mineral wealth and commodities alone—and they know it.

Country Report | Nigeria
Nigeria is Africa’s largest economy, but the recent slump in oil prices has halved government revenues. The new Buhari government must now ensure the country’s economic roller coaster ride does not grind to a complete halt.

Regional Report | Africa
Africa’s story is no longer that of a continent with great potential.  Increasingly, the leaders and peoples of the continent, in collaboration with outsiders, are translating that potential into concrete achievements.

Uganda, the East African country that will soon to join the league of oil producers, is set to build a refinery before its own production capacity comes online.

Milestones | Nigeria
A week before it was to take place, Nigeria’s presidential election was postponed for fear it would spark violence. The election was originally scheduled for February 14 but has been pushed back six weeks to March 28. The outcome of this delay is unclear.

Country Report | Angola
Up until 2013, Angola's GDP, buoyed by booming oil revenues, grew by an average rate of 10.7%, reaching an all-time high of 23.2% in 2007. Now, as economic growth slows and the country’s financial coffers move from surplus to deficit, Angola is rethinking its dependence on “black gold.”

Country Report | Mozambique
Mozambique is the current star in Africa’s rising inward-investment constellation. For much of the last quarter of the 20th century, Mozambique was a war zone. Today the only war on its horizon is a bidder’s war, as investors salivate over the opportunities this Southern African country offers.

Nigeria | Milestones
Nigerians go to the polls next month with some trepidation...

Africa | Emerging Markets Regional Review
African economies are well on their way to transforming the region’s status from a frontier to an emerging market. The IMF predicts Africa will grow by 5.8% in 2015, up from 5.1% this year, with Chad, Côte d’Ivoire, Democratic Republic of the Congo and Mozambique projected to growth over 8%.

NEWSMAKERS | POLAND
Tony Elumelu, former managing director and CEO of United Bank for Africa, returned to the bank in late August as chairman, following his appointment by the shareholders.

AFRICA 2014 | UNITY
Africa’s dream of greater economic unity is gradually becoming a reality, with plans to establish a free-trade area spanning eastern and southern African countries well under way. Yet it could take time for the associated economic and trading benefits to play out.

GHANA
The world’s second-largest producer of cocoa, is expected to ask the International Monetary Fund for help.