FX has withstood many crises, including speculative attacks on the British pound, the Mexican peso crisis, the Thai baht crisis and, more recently, a euro under strain and a potential threat to the dollar from quantitative easing. 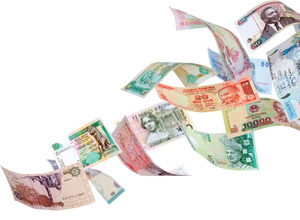 Amid this uncertain backdrop, however, volumes continue to rise as the market embraces electronic trading.

The foreign exchange market has grown significantly since 1987, when daily trading averaged about $600 billion and was done primarily on the telephone. Today the FX market trades approximately $4 trillion daily, mainly on electronic trading platforms. The market has grown steadily over the years, despite the 1999 introduction of the euro as an accounting currency, which eliminated the need for many FX trades.

There have been a series of currency crises since finance ministers of the then G-6 nations met in Paris 25 years ago to sign the Louvre Accord. In 1992 the UK was forced out of Europe's exchange rate mechanism after speculative attacks on the British pound. George Soros' Quantum hedge fund made a $1.1 billion profit on a $10 billion bet against the pound.

Other crises followed. The Mexican peso crisis emerged in December 1994, when the peso's value was cut in half. The US intervened with $50 billion of loan guarantees. The Asian currency crisis of 1997 started in Thailand and spread to the Philippines, Indonesia, Singapore, Malaysia and South Korea.

The grand experiment of the euro seemed to be working quite well for more than a decade. More recently, however, some of the initial doubts have crept back in, and the euro is being tested as never before. Some economists worry that it is the dollar that could be threatened in the future—a sea change for FX could be on the horizon.