For its anniversary issue, Global Finance crunched the numbers to come up with the institutions that have won our World's Best Bank awards most often over the past 16 years. Presenting The Winners' Circle.

For Global Finance' s anniversary issue, we looked at all the banks that had won our Best Bank awards from 1997, when we first began giving these awards, to the present day. Perhaps the most notable feature of these results is that within the global awards, whatever the banking category, the overall winners are confined to a handful of multinational players: Citi, HSBC, Bank of America Merrill Lynch, JPMorgan Chase, UBS, Credit Suisse, BNY Mellon, Goldman Sachs, Deutsche Bank, State Street Global Advisors, Standard Chartered and BNP Paribas. The notable exception is Kuwait Finance House, which wins the award for the relatively new category of Best Islamic Finance Institution.

Clearly, aggressive bank consolidation has been a factor throughout this period, and even more so since the 2008 financial crisis. Nevertheless, some of these multinational players have achieved a remarkably consistent level of excellence for well over a decade, and a number have trounced all their competitors for the duration. BNY Mellon, for example, has won the World's Best Custody Bank a total of 12 times out of 13 years.

This trend does not mean that some awards, such as Best Corporate Bank, Best Investment Bank and Best Private Bank, have not been closely contested. For example, JPMorgan Chase has won the World's Best Corporate Bank award the most times—seven—followed closely by Citi, with six wins. Likewise, UBS beats Credit Suisse to the title of World's Best Consumer Bank by seven wins to five.

A more important trend is that within any of the best bank award categories, one bank has often been ascendant for a number of successive years, before a competitor takes over for its own sustained winning streak. For example, JPMorgan Chase took the award for the Best Corporate Bank from 1999 to 2001. Citi then took over that mantle between 2002 and 2007, only for JPMorgan Chase to regain the top spot in 2008 and retain it ever since. Although the financial crisis of 2008 profoundly changed the global banking hierarchy that year and allowed different banks to dominate, the trend has held true ever since our awards began.

Global Finance 's regional awards for the best banks show that JPMorgan Chase has won the most times in North America, Santander in West Europe and Latin America, HSBC in Asia, and RBI in Central and Eastern Europe. Standard Bank is the most frequent winner in Africa, while the National Bank of Kuwait comes top in the Middle East.

Compared with the 71 individual countries that were covered by the Best Bank awards when our survey first began, 133 countries—from Azerbaijan to Zimbabwe—are now covered, and in the biggest change from the early years, most African nations are now included in our overview.

In some countries, one local bank dominates, showing that local banks often can provide the best service. The Bank of the Philippine Islands has taken the Philippines' Best Bank award an impressive 13 times in the past 16 years. In other countries, a number of local banks have consistently vied for first place. In Poland, for example, Bank Pekao has won our Best Bank award six times, and runners-up Citi Handlowy and BRE Bank each won three times.

As with the regional and global awards, the country awards tell the story of aggressive expansion over the past 10 years by multinational players such as UniCredit, Santander and Citi. They have secured leading positions in national markets through acquisitions.

Can the predominance of large universal banks across the globe continue? For a start, regulatory requirements under Basel III and the Dodd-Frank Act dictate that it will not be profitable for universal banks to pump money into every product area in the future. Furthermore, large banks, and in particular European banks, are facing pressure from ratings agencies and regulators to deleverage. That has already prompted tighter credit conditions for the clients of some major Spanish and Italian institutions in their satellite operations in Eastern Europe and Latin America.

It will be interesting to see if the current dominance of multinational banks around the world can be sustained in the medium term, much less over the next 25 years. 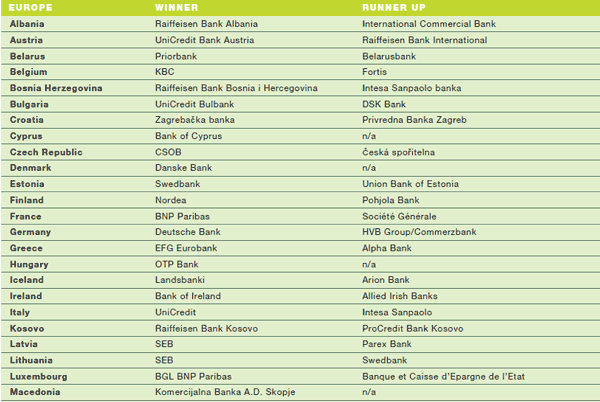 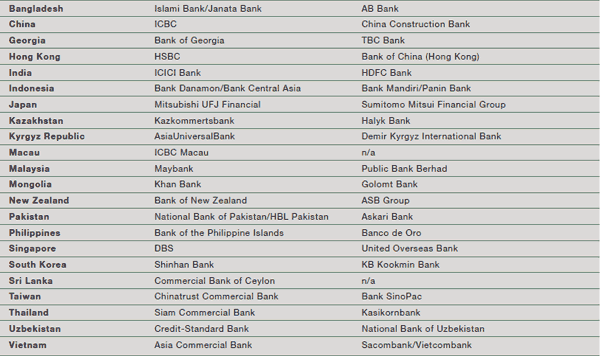 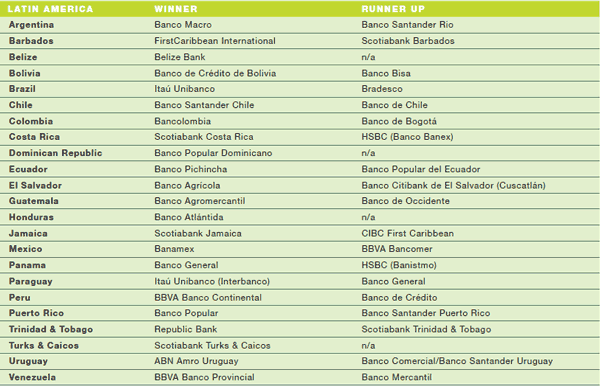 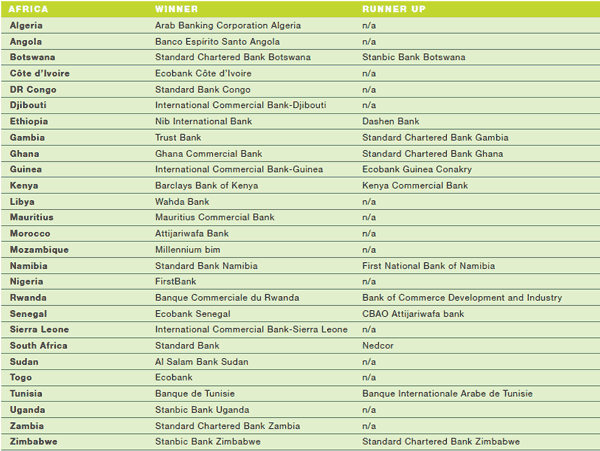