Perhaps the defining characteristic of 2012—in contrast to 1987 when Global Finance launched—is the interconnectedness of the world.

Those in the US now have more in common with those in Indonesia than ever before. This has come about partly through technology. Modern telecommunications and the Internet have necessarily bridged geographical gaps. They have also facilitated outsourcing of services to emerging markets, enabled social networking (the ultimate form of connection) encouraged the idea of the citizen reporter—everyone’s views (reflected in a blog or a tweet) available to the world—and facilitated the concept of activist hacking and WikiLeaks.

However, globalization has also been expressed in more profound ways. Human migration has been an important component, helping to distribute people with different ideas, cultures and religions more broadly. More temporary migration—global tourism—has also been beneficial in regenerating moribund cities through the promotion of culture, known as the Bilbao Effect.

More important still has been the migration of ideas such as democracy. In 1987, it was pretty clear that the economy of the Soviet Union had lost the race with the US for global supremacy, but it was far from certain that Mikhail Gorbachev’s perestroika (restructuring) and glasnost (openness) would lead to the collapse of the Soviet Union and the end of communism there. Now, democratization has been established there and elsewhere, across large swaths of the world—including in Chile (in the late 1980s), South Korea (1987), South Africa (1994), Taiwan (1993), Indonesia (1998), Mexico (1999) and Kenya (2002), and democracy has been strengthened in dozens of other countries, such as Brazil.

FREE-MARKET CONUNDRUM
So too have the concepts of free-market economics, privatization and free trade taken hold—accelerated through initiatives such as Nafta and the advent of the euro currency in 1999. Although the degree of openness of global economies continues to vary significantly—the internationalization of the renminbi in China is under way but could still take decades to be completed—the direction of travel is certain.

Successive countries have unshackled their economies with the goal of stimulating growth, raising living standards and improving productivity. This process has not always been successful. Certainly, the mantra of free markets has unleashed the creativity and ingenuity of people worldwide and taken hundreds of millions of people in China, for example, out of poverty. However, privatization has all too often been used as a way to reward favored factions with the wealth of the state: In Russia financial liberalization led to the outright theft of state assets and the establishment of an oligarchy. More generally across the world, economic liberalization has increased income disparity and social tension—reflected in the Arab Spring uprisings in the Middle East and the emergence of the Occupy movement in New York, London and elsewhere.

Financial deregulation has also been an important component of globalization. In the US, the repeal of the Glass-Steagall Act in 1999 enabled the creation of banking behemoths that combined commercial, retail and investment banking in ways that generated unprecedented opportunities and risks for the global economy (many of which were realized in 2008) by spreading such instruments as leveraged buyouts, derivatives and collateralized debt obligations. Although the unprecedented free movement of capital around the world has undoubtedly created bubbles, it has also stimulated growth and encouraged development.

The adoption of more-open markets has spurred another facet of globalization: the remarkable growth of the so-called BRICs (Brazil, Russia, India and China) and the unprecedented shift of the focus of economic growth from West to East (some economists define it as a shift from North to South). Around 75% of global growth will be generated in or through the emerging markets in the coming year. At the same time, globalization is creating new trade corridors—China has surpassed the US as Brazil’s biggest economic partner, for example—that exclude the developed world entirely. The growth of global commerce has led to an increasing belief that trade rather than aid is the path to prosperity for the world’s poorest countries.

Globalization has played an important role in the migration of other ideas such as environmentalism—there is no issue more cross-border in nature than pollution. And it has led to the development of renewable energy markets (although recent developments in energy production also include the environmentally dubious fracking). However, it has also facilitated the dissemination of hatred: Global jihad and the war on terror could only have occurred in a globalized world. 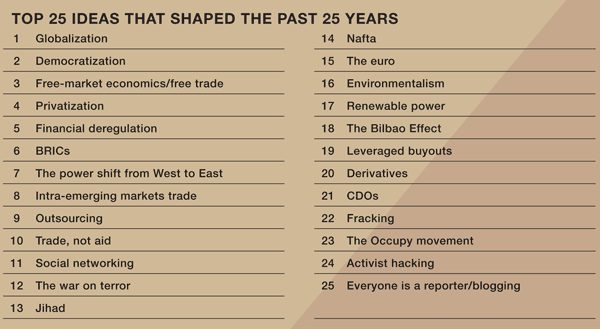