RISING TO THE MOMENT

Martin Senn became chief executive officer of Zurich Insurance in January 2010 after joining Zurich as chief investment officer in 2006. A Swiss citizen and career international banker, he spent 18 years with the former Swiss Banking Corp and nearly a decade with Credit Suisse. 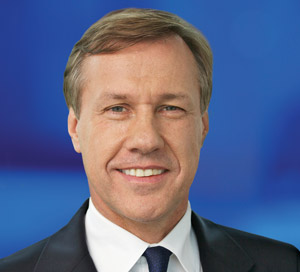 Global Finance: What key events have helped shape the global economy over the past 25 years?

Martin Senn: For better or for worse, the past 25 years have been characterized by a great opening of our global economy. We are truly a 24/7 world. We didn't manage the risks of that liberalization perfectly, but we must stay the course: improve our understanding and management of these interconnected global risks and keep finding new ways to build global consensus and cooperation.

GF: What key risks are facing developed and emerging markets?

Senn: Over the short term, it is the global economic challenges, particularly the sovereign debt crisis in mature markets. How we deal with this challenge will have enormous long-term repercussions. The move toward protectionism in some markets could dramatically impact trade and global growth. We also are seeing waves of regulation, public mistrust in government and corporations, and a swing to reactionary politics in some jurisdictions.

The longer-term risks include climate change, changing demographics with aging populations in developed economies, and an emerging middle class in industrializing nations. There is growing pressure on scarce resources, particularly water. At the same time, necessary cuts in government spending will undermine social safety nets in some economies.

GF: How will the business of insurance change?

Senn: We will evolve with our customers' insurance needs. Like us, many customers are taking on risks in more regions in order to grow. They will not want to deal with multiple insurers. So you can expect globalization within our industry. Being able to offer solutions across multiple jurisdictions will be imperative.

GF: What have been the major changes in the property and casualty insurance industry over the past 25 years?

Senn: One of the biggest changes has been the recent increase in industry-insured losses resulting from the surge in natural catastrophes and subsequent large losses, and the greater volumes of such insurance being written. Another significant change has been the growing demand for property and casualty insurance as emerging economies rapidly industrialize. Many of these markets have developed insurance markets very quickly.

GF: What ideas and events have influenced your view of world affairs and as a global business leader?

Senn: The fall of the Berlin Wall and the opening of the Chinese economy profoundly affected me. During the mid-1980s, these were intractable, impossible ideas. The two changes appeared to have happened suddenly. Yet in retrospect, one can see they were built on a long and careful dialogue. A moment of leadership by a few, very few, key individuals was the tipping point. These changes reflected underlying trends in society, but were realized by leaders taking responsibility, rising to the moment and seizing the opportunity.

GF: What person has most strongly influenced you?

Senn: It sounds like a cliché, but it has been my wife. She's Korean and was a concert violinist. She truly opened my eyes to a new realm of culture and gave me an expanded and personal perspective on society and how people interact.