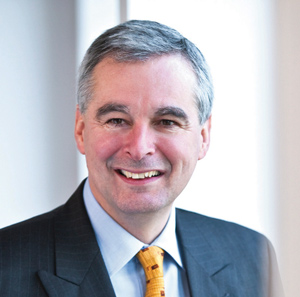 Mike Rees : First, the repeal of the Glass-Steagall Act and the financial [change] that stemmed from that, including the development of the eurobond and derivatives markets. Second, inflationary pressures from fuel prices led to central banks' obsession with inflation management as the single key metric. Third, you have the phenomenon of the rise of economic power in the East, which started out as cost arbitrage funded by consumer growth and low interest rates in the West. That stalled in the 1990s because the evolution of the financial sector in Asia did not keep pace with economic development and created asset bubbles, which led to the 1997 Asian financial crisis. There was an impressive recovery from the crisis, which resulted in sustained economic growth in Asia for the past 12 to 15 years.

GF: What are the key economic risks over the next five, 10 and 25 years?

Rees: The fundamentals in Asia are in a good position, but the challenge we've got is increased unemployment in the West, a lack of diversity and distribution of wealth, and politics moving back towards socialism, which could lead to protectionism and stop the trend of globalization.

As with any crisis you also have an overreaction by the regulators. Whenever you get a problem with the banks, you get regulatory overreaction, and that is the problem we have at the moment. One of the challenges is that you've got very few levers on the monetary or fiscal policy side, and when you start pulling back on bank credit availability, it is only going to make politics, the economy and unemployment worse.

GF: What challenges lie ahead for emerging markets?

Rees: In the next 18 months to two years, there is a real challenge around India. Its problems are rooted in the political leadership. India's governing coalition is a mass of complete political malaise. It has created a lack of confidence domestically and internationally. Also, how does China sustain the type of political leadership that is needed to sustain economic growth? China is one of the greatest economic miracles of our time, but how are they going to sustain that?