“The global slowdown has helped us. Carriers are used to buying from providers that cost five times more.” —Mike Gallagher, Flarion 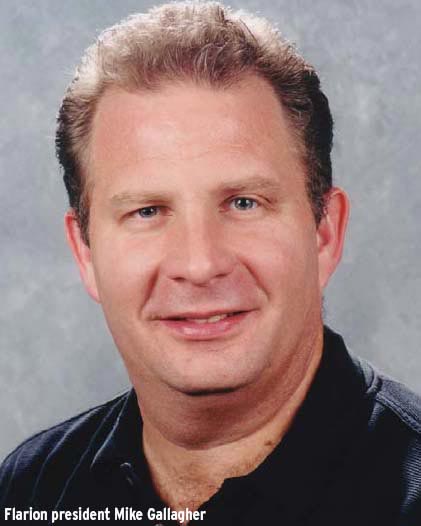 Flarion Technologies is a company without any revenues and without any paying customers. But the four-year-old New Jersey firm believes it will play a big part in the future of the business wireless data market. Flarion has developed technology— called flash-OFDM and originated in Bell Labs— that’s intended to allow wireless carriers to provide mobile wireless broadband data service that is twice as fast as 3G and even faster than Wi-Fi. It promises to allow customers the same speed and reliability they are used to in their office or home, in a WAN (Wide Area Network) environment.
The company, which was spun out from Bell Labs and its parent Lucent, has forged trial agreements with six telecom operators worldwide, including Nextel Communications and three South Korean wireless providers—SK Telecom, Korea Telecom and Hanaro. The upstart Flarion, which has more than 140 employees in three offices in the United States, United Kingdom and South Korea, is trying to establish itself as an alternative to 3G, 2 1/2 G and Wi-Fi technologies.
The company is banking on the strength of its technology, enabling high-speed and high-capacity wireless data and voice at lower costs.“This is a disruptive technology. It’s a DSL-like experience on a mobilized basis. On top of that it does voice as well,” says Mike Gallagher, president of the privately held Flarion and formerly an executive with Nortel Networks.
The OFDM technology allows mobile operators to hook up corporate LANs with wireless WANs. “The Flarion technology offers a solution that from a technical standpoint is designed specifically to extend Internet protocol to the wireless environment,” says Philip Marshall, director of wireless mobile technology research at the Yankee Group, a Boston-based technology and communications research and consulting firm. It does so without companies having to make significant changes to their existing legacy systems, he adds.

THE PITCH
Flarion’s flagship product is the RadioRouter base station (the firm was initially called RadioRouter). It’s essentially a big box that transmits Internet data over radio waves. The system, which leverages existing cell sites and radio spectrum, allows wireless network operators to connect large numbers of mobile users to the Internet.
Flarion’s technology involves packet-based architecture instead of the common circuit-based systems that are prevalent in the wireless world. Specifically, it uses a digital modulation that splits the wireless signal into several different strands at different frequencies.This allows wireless carriers to transmit more data more quickly and more cheaply than 3G and Wi-Fi rivals can, Flarion executives say. In fact, they boast that savings could be as much as 70% to 90%. Building out a wireless network for 20 million wireless users, with Flarion’s OFDM technology,would cost $200 million, or $10 per user, Gallagher says.
Flarion’s target market is the 250 major wireless carriers around the world (firms such as Vodafone, Sprint, Nextel, Verizon and many smaller providers), serving about 200 million subscribers. Many of these firms are mired in heavy debt and weak cash flows after spending billions on expensive 3G licenses only to see a global economic and business slowdown ensue.
That could be viewed as both an opportunity and a problem for Flarion’s efforts to gain a foothold in the wireless market. On the one hand, these telecom giants  are resistant to any new spending. But on the other hand, they’re receptive to low-cost technology alternatives. “In a weird, perverted way [the global slowdown] has helped us. The carriers are used to buying technology from their traditional provider that costs five times more,” says Gallagher.

SOUTH KOREA
Flarion has been aggressive in targeting the South Korean wireless market, successfully luring SK Telecom, Korea Telecom and Hanaro Telecom to test its technology, because of the willingness of wireless carriers and users to adopt new technologies. “The Korean operators have taken the initiative to be at the forefront of mobile broadband. Korea is extremely interested in the next generation networks,” says Ronny Haraldsvik, senior director of marketing strategy at Flarion.
The country has more than 32 million mobile telephone users and more than 10 million high-speed Internet subscribers, giving it one of the highest rates of broadband penetration in the world. KT, Korea’s biggest broadband Internet service provider, will test Flarion’s RadioRouters in Seoul in April as part of its effort to expand its mobile business.

CHALLENGES
The most pressing challenge Flarion has is to convert promise and potential into reality. Specifically, the wireless start-up needs to convert its trial participants into commercial customers. “It’s one thing to get to a trial. The next challenge for them is to get to paying customers,” says Yankee Group’s Marshall.“They have a good technology; it’s a matter of getting it implemented into the marketplace.”
On that note, Flarion’s Gallagher says the firm’s technology will be deployed or installed in 10 to 12 carriers by the end of the year, at which time the fledgling firm will also have its first paying commercial customers.
Flarion has disclosed $62 million in funding it has raised from venture capital, wireless and other technology firms. Its investors are Cisco Systems, Bessemer Venture Partners, Charles River Ventures, Equitek Capital, New Venture Partners, Nassau Capital, Pequot Capital and SK Telecom.
Flarion has raised an additional “substantial” amount, which it won’t disclose, that will enable the company to bring its product to market without having to raise additional funds.“We’re not seeking any additional funding to support commercial orders,” says Haraldsvik. “In these economic times, it’s impressive for a company like Flarion to have the necessary funding to take us all the way.”
He concedes that Flarion has a lot to prove to the marketplace but says that this year it will. “We will show the world in 2003 that we’re not only commercially ready but that we’re taking commercial orders,” says Haraldsvik.
We shall see.