Features : The Man Who Wired Russia 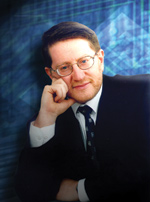 First, let’s get the clichés out of the way. Anatoly Karachinsky is no ‘Russian Bill Gates’, nor yet the ‘oligarch of tech’.

The 42-year-old president and CEO of Information Business Systems may share the penchant for casual clothes and soft-speaking of ‘ubergeeks’ the world over, but he’s his own man, with a distinctive vision of where his company—and the tech industry—fits in the fast-evolving Russia space.

And as for oligarch, well, let’s just say growing an information technology company in post-Soviet Russia was tough enough without the land-grab tactics that passed for business life in the 1990s.  “We did not feel that we were businessmen,” says Karachinsky. “We were developing systems.”

That kind of diffidence clearly pays. IBS was formally set up in 1992 as a code-writer, with just 12 employees and $13,000 of Karachinsky’s own money. A decade-and-a-bit later it’s Russia’s leading systems integrator, with more than 2,000 employees and a client list that spans the elite of Russia’s companies and ministries—as well as international blue chips such as Dell and IBM. The company booked $250 million of revenues in 2001, the last year for which figures are publicly available, and claims to be in the black.

“The market I work in did not exist at the time of the Soviet Union,” says Karachinsky. “Shipbuilding, metallurgy, machine building, anything—you can name it—but not information technology.” A programmer at the ministry of railways, where he helped automate the railroad countrywide booking system, Karachinsky had moved through a couple of years with an ill-fated Russo-Austrian tech joint venture—it taught him how not to do business in the Russia of that time, he says—to the point where he pulled IBS out of the ashes. His first project was to begin dragging the payment system for the 35,000-plus branch state savings banks monolith Sberbank into the electronic age. That job carried a $1 million price tag, but it defined the scale of the opportunities up for grabs in a country drowning in paper.

Since then IBS engineers and consultants have trod most every corridor of power in post-Soviet Russia, installing systems and doling out advice in bureaucratic monoliths such as gas giant Gazprom, through the tax and finance ministries, to the central bank.

Karachinsky says his company now attracts more private sector customers than public, pointing to foreign blue chips such as Citigroup and Boeing. They typically have signed up through Luxoft, an IBS operation aimed at overseas companies looking to fill hometown skills gaps by outsourcing tasks such as code-writing. Russians firms are rushing to meet that need and provide a low-cost alternative to Indian expertise. On some estimates there are over 250 software outsourcing operations in Russia, but with a few exceptions, such as Egar Technology and Actis, they’re still kitchen-table operations.

Over the years, IBS has expanded its range of services, taking in computer distribution (in partnership with Dell) and, most recently, a B2B network for Russian companies. Russia’s hard wiring may be as backward as its brain pool is advanced—Internet penetration is woeful outside Moscow and a few other centers—but that meant the dot-com boom proved only a brief distraction.

Despite his portrayal of himself as an engineer first, a businessman second, Karachinsky and a few close colleagues—including US Internet guru Esther Dyson—had a road map for the company’s growth. “Sometime in 1993 we started to think, ‘What is this business we’re building and what are we trying to achieve?’” says Karachinsky. “As an attempt to answer this question, we did something unthinkable for a Russian company at the time: We did some long-term strategic planning.” The answer was clear, he says: “We decided to build a large IT company which we could take public.”

As a tech company in low-wage, low-rent Russia, IBS didn’t burn much cash—dream on, Silicon Valley!— which was just as well. “There was no such thing as investment money then,” says Karachinsky. But he knew the time would come when he’d have to pass the begging bowl. He tapped friends who worked in the Moscow office of investment bank Merrill Lynch for some after-hours advice on an eventual float. Their answer: “Forget it, Anatoly.”

“The major problem for Russian companies was that no one trusted them,” says Karachinsky. “We had to build trust.” IBS stuck to basics, keeping clean accounts, paying taxes—and not shoveling money offshore as so many other of its compatriots did at the time.

That had its frustrations. Speaking at the 2001 World Economic Forum meeting in Davos, Karachinsky chided the European Bank for Reconstruction and Development for not lending to IBS, arguing that Russian attempts to meet international standards met with an incomprehension that sometimes bordered on condescension. The  patience paid off—eventually.

Partly through the offices of Dyson, Citigroup came on board as a shareholder in 1996, AIG Brunswick a year later. In 2002 the International Finance Corporation acquired an option to take a stake. Karachinsky explains that it wasn’t just money the company was after—but also the stamp of approval that prestigious foreign shareholders lent to the company and its practices. That was meant to be a stepping stone to a planned float on Nasdaq.

“We were ready to do it in September 2001—exactly as we had planned back in 1994,” says Karachinsky. With stock markets in turmoil after the attacks in New York and Washington, advisers Brunswick UBS Warburg cautioned against the move. Karachinsky says he’s waiting for advice on when to relaunch the process, though given all that has gone on in the meantime, it’s by no means certain that Nasdaq will be the target this time around. “It’s currently difficult to say based on what is going on in the markets,” says Karachinsky. “I wouldn’t be surprised if one day they tell us it makes more sense to do it in Russia rather than elsewhere.”

It would be wrong to call Karachinsky a nationalist, but like other prominent Russian businessmen he seems inoculated against the love of all things American that can mark the business elite in other countries struggling to establish developed economies. “No country is a model on its own,” he says, arguing that Russian standards of business life can be higher than those found in the US. Nor is all the legacy of the former communist system a stultifying one, he argues: “Russian businessmen are quick learners; under the Soviets you had to think quick to stay afloat.”

Karachinsky says that same legacy is reflected in the educational pool from which companies like his can draw: “Russia has always been a brain source—a storage of intellectual power.” That resource was lovingly nurtured by a Soviet establishment keen to match itself against the world, particularly in all things technical. Parlaying that raw material into efficient tech workers hasn’t always been straightforward, but the IT skills level is improving, he says. Last year around 70,000 students graduated in IT, he says, down from a peak of 105,000 in 1999. They’re better qualified and more adjusted to the business environment, though. IBS regularly harvests awards as the best company to work for in Russia. Karachinsky says the playing out of the tech boom and growing confidence in Russia’s economy has made attracting top managers easier still. “As soon as Russia started to change, people came back,” he says.

In March this year the company hired Marco Burkhardt to head its drive into the fast-growing mySAP.com management system business. Burkhardt had been head of SAP in the CIS, after working in Berlin. Nurturing a domestic IT base in Russia alongside a vigorous hydrocarbon sector is an obsession of Karachinsky’s; he sits on a committee that advises President Vladimir Putin on just how to do that. “This is the wealthiest country in the world,” says Karachinsky. “I don’t know any country that has more intellectual capital or natural resources.”