Caution is the watchword in a sluggish market for corporate takeovers. 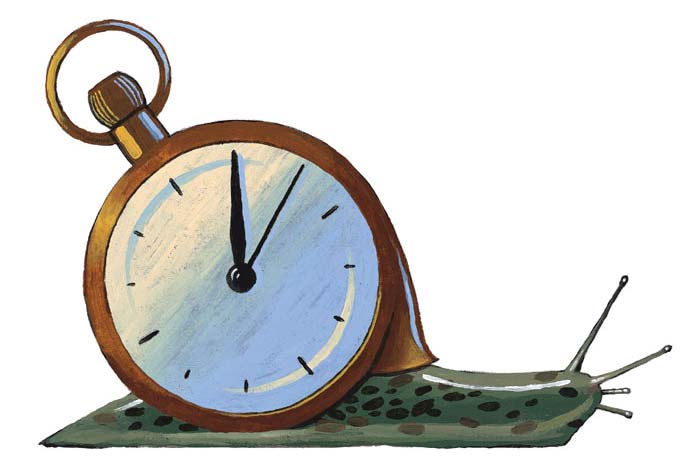 Throughout last year, observers of international M&A; predicted a bounce-back in deal volumes. It didn’t happen.According to data providers Thomson Financial, global announced deal value fell 28% in 2002. The number of deals dropped 16%, with $1.2 trillion worth announced from around 25,000 transactions. The fall was worst in the United States,where volumes fell 41% on the previous year.
For bankers expecting a pick-up in 2003, the message is,“Don’t wait up.”And history won’t repeat itself anytime soon. “It’s unlikely that we’ll see during our lifetimes a deal pace as was experienced in the late 1990s and 2000,” says David Perkins, partner at VERCOR, an Atlanta-based acquisition-advisory firm. “What occurred was an overheating fueled by excess capital, favorable accounting rules and irrational exuberance by investors.”
In February BP’s $6.75 billion purchase of a 50% stake in a Russian oil company briefly reignited memories of the glory days of corporate wheeler-dealing, but outside a few key sectors such as oil, activity is set to remain firmly in the mid-market and with companies that have hard cash to spend, not shares.
“These days, cash is king,” says Richard Morgner, managing director and head of M&A; at Chanin Capital Partners, a New York investment banking firm. That’s a far cry from the late 1990s when “the market was dominated by stock-for-stock deals,” says Morgner. “People had an inflated currency and could go buy up the world.” More than 75% of the deals done in the US are cash. That switch fits sellers just fine: Depressed stock prices and the fact that conglomerates are pressed to focus on their core operations mean they want money up-front.
Michael Kollender, managing partner at New Jersey-based investment banking firm Ryan Beck, points to the uninvested $1 billion held by American private equity firms and says that “although we have seen the return of capital to limited partners from a few select funds, going forward I do not believe this will be the norm.” Private equity firms will, by far, lead the level of deal activity in 2003 and 2004, he says, although “we also expect to see the corporate buyer slowly reentering the deal market, but first at a crawling pace.”
“While cash may be king, it’s lonely,” says Keith Stock, vice president of Cap Gemini Ernst & Young Financial Services Consulting in New York.“Many of the best targets have already been taken, and the financial hurdles for a deal are hard to meet in these tough times.”
Still, deals are being done. While mega-mergers are off the radar screen,transactions under $100 million fell by just 15% last year. “It’s slower than it’s been, but that’s just a function of the weaker economy,” says Morton Pierce, chairman of the M&A; group of international law firm Dewey Ballantine in New York. “There’s still a great deal of activity in the middle market.”
But the idea that, per se, expansion and acquisition are good has been sorely tested. Four years ago telecom company AT&T; went on a $10 billion shopping spree for cable.AT&T; subsequently sold these holdings to Comcast, a Philadelphia company that has interests in cable, broadband networks and content. The resale was completed last November, with Comcast paying less than half of AT&T;’s initial outlay.
Companies are now thinking more carefully. “Energy companies have realized, for instance, that just because you know a utility and have some infrastructure, it doesn’t mean that, say, you can get into media content and distribution,” says Pierce. Instead, it’s run-of-the mill and unambitious mergers that are keeping M&A; alive.“Sectors in particular which are in with investors and that are driving volumes are those in the old economy,” says Chanin Capital’s Morgner. “Slow and steady and predictable is what investors want, for instance like listings directories. They want nice track records and dependable growth.” 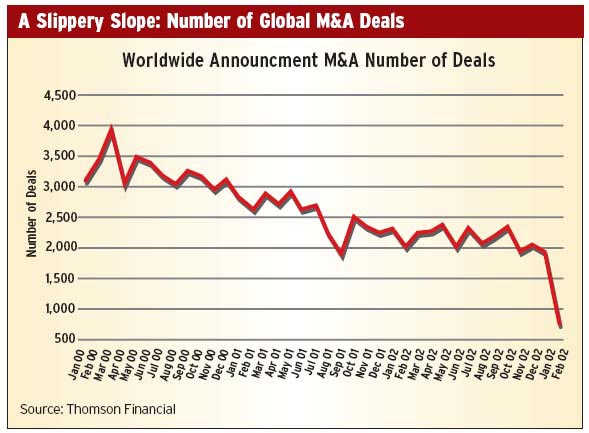 “‘Tech’ will remain a dirty word for 2003, and I do not anticipate recovery in the sector for the foreseeable future,” says Mark Herlach, a partner at law firm Sutherland Asbill & Brennan in New York.“Many companies bought dogs in the go-go years that they would now like to unload, but there is little enthusiasm for purchasing most of those enterprises today, even at substantial discounts.” Putting aside bottom fishers who purchase “only after rigorous due diligence and pencil sharpening,” Herlach sees more interest in sectors that benefit from low interest rates and that buffer economic uncertainty, such as building products, home improvement and real estate.
“There are certain subsectors within technology where we expect a reasonable amount of activity, including infrastructure software and Wi-Fi,” says Brooks Dexter, senior managing director at Los Anglesbased M&A; adviser USBX Advisory Services. Dexter also thinks health care is an area to watch.
Caution is the watchword. M&A; bets are being taken off in the light of the war in Iraq, as uncertainty spreads across all financial markets. Judging the ramifications of war on a stand-alone company may be hard enough without perhaps adding fresh exposures to the equation. “The overhang of the uncertainty of a war in the Middle East is causing many parties to hold back from transactions,” says Edward Smith of law firm Chadbourne & Parke’s corporate practice in New York. “A quick and positive solution will help the M&A; market.”
A global economic upturn depends on more than events in the Middle East-and Korea. “But on the other hand,”says Keith Stock of Cap Gemini Ernst & Young, “the present economic downturn underscores the benefits of diversified business exposure and revenue streams. On balance there is still a place for intelligent diversification.”
Mark Thompson, a London-based partner in law firm King and Spalding’s M&A; practice group, says that boards of directors will increasingly be more directly involved in transactions and forcing management to justify acquisitions. “This may initially slow down the acquisition process but may give companies and their shareholders greater confidence in the completed acquisition,” says Thompson.

M&A; Revival Corporations will return to the M&A; market, says USBX’s Dexter, because they have to. Organic growth is hard to come by in most sectors, he says, and corporations will continue to use acquisitions as a tool to grow and stay relevant to investors.“I suspect that the pendulum will continue to swing back and forth over conglomerization,” he says. CEOs may be risk-averse now but, he says, in time will be emboldened to remake their companies through acquisitions.“Whether they will succeed in creating shareholder value is another matter entirely.” ■