Part of the rationale for the deal is that Devon’s gas-focused North Ameri-can assets will be comple-mented by Ocean’s inter-national and deepwater development and explo-ration projects.

With interests in 500 deepwater Gulf of Mex-ico blocks, Devon will be the largest indepen-dent deepwater Gulf leaseholder. It will also get Ocean’s West African oil and gas activities, as well as its operations in Egypt, Russia, Brazil and Indonesia.

Analysts generally agreed that the merger is a good deal for Devon. “Without paying a signifi-cant premium, Devon will get a much-needed diver-sified portfolio of domes-tic and international assets with strong pro-duction growth over the next three to four years,” says John Kartsonas, ana-lyst at Standard & Poor’s in New York.

Devon already has more than doubled in size in the past few years, follow-ing a string of acquisi-tions. In 2001 it bought Anderson Exploration of Canada for $3.4 billion and Mitchell Energy and Development of Texas for $3.1 billion.

Following its merger with Ocean, Devon will have about 2.2 billion barrels of oil equivalent proved reserves, with 84% in North America. Natural gas would account for two-thirds of production.

Larry Nichols, Devon’s chairman, president and chief executive, says the deal will allow the com-bined company to use sur-plus cash flow to fund exploration projects that Ocean would not have been able to develop on its own.

Following the merger, Nichols will retain the positions of chairman and CEO. James Hackett, chair-man, president and CEO of Ocean, will be named president and chief oper-ating officer. 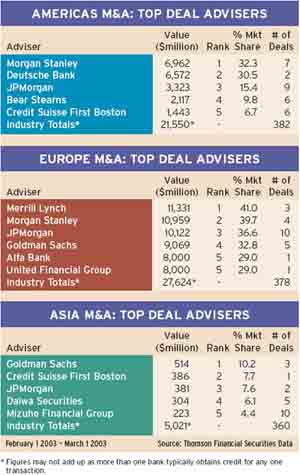 Europe passed the Ameri-cas in total mergers and acquisitions in February, led by BP’s landmark deal to merge its Russian assets with those of Alfa Group and Access-Renova in a joint venture agreement valued at $8 billion.

Europe had a total of $27.6 billion of mergers and acquisitions in the month, against $21.6 bil-lion for the Americas, according to New York-based Thomson Financial.

Tyumen Oil, owned by Alfa and Access-Renova, will be the main produc-tion unit of the giant new Russian oil company. Lon-don-based BP was to invest $1.25 billion of assets, including its minor-ity stake in Sidanco. BP also agreed to pay $3 bil-lion in cash as well as make three additional annual payments of $1.25 billion each, payable in newly issued shares, for a 50% stake in the new company.

The deal will create Russia’s third-largest oil company after Lukoil and Yukos.The new company will have output of about 1.2 million barrels of oil a day.The Russian partners will appoint the chair-man, and BP will name the chief executive.

BP’s investment equals all of the foreign direct investment in Russia for the past three years combined. 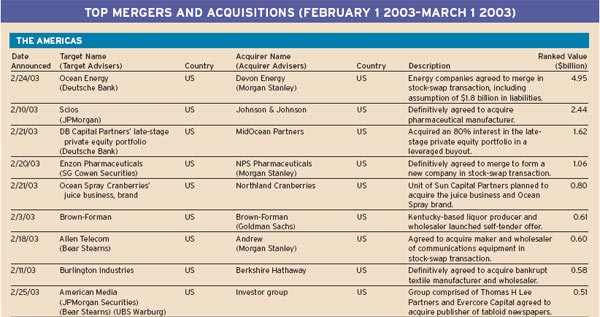