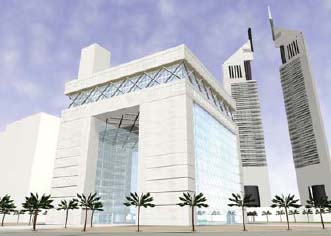 Which are braver—bankers or rugby players? The planners behind the Dubai International Financial Center (DIFC) must hope the former. As war loomed in March, not only did lily-livered golfers refuse to visit the emirate, but also the captain of English rugby league team the Bradford Bulls.
The DIFC hopes to become a major financial hub for the Middle East and to bridge the marketless span from Frankfurt to Singapore. Funded by the state, nearly five million square feet of transformed desert will host some of the largest banks and financial institutions in the world. As well as the $1 trillion GDP of the region, banks and financial services companies should be attracted by zero tax rates.
Sponsors had hoped the DIFC would be up and running by early this year, but developing a regulatory framework for an effectively autonomous region has proved slow. With a federal decree, the DIFC will be able to have its own laws in English, deal in dollars and allow its licensees to use their home jurisdiction for purposes of litigation. Some key regulation drafts have been completed, but more are outstanding.
There have been apparent tensions between the DIFC and the UAE central bank, which has been the sole regulator of banks, and some international regulators have been uncomfortable about possible future entanglements.
Time is running out. In September Dubai plays host to the IMF. “We hope to have proper progress” by then, a spokesperson for the DIFC says. “We’ll be at the stage where we can explain and launch the structure.”