Features : Canadian Banks Want to Fatten Up to Bring Home the Bacon

April 01, 2004
Author: Gordon Platt
The Big Five banks are considering making more acquisitions in the US. 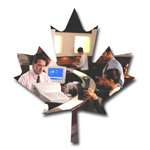 Casting a wary eye at the wave of big bank mergers in the United States in recent months, Canada’s major banks are looking for ways to grow in an industry where size is critical to success, and perhaps to survival.
The Big Five Canadian banks are having difficulty finding growth opportunities on their own turf, however, and many of them think the grass looks greener on the US side of the border. Bank of Montreal, for example, is aiming to become the biggest bank in the Chicago area in the next five years. In February it agreed to buy New Lenox State Bank in Chicago for $228 million, or three times book value. The purchase was Bank of Montreal’s 13th acquisition in the US in the past five years. Royal Bank of Canada has made a dozen US acquisitions totaling $5.5 billion since embarking on a US expansion strategy four years ago.
However, Canadian Imperial Bank of Commerce, or CIBC, is pulling in its horns after an aggressive push into US investment banking that got it into trouble with US regulators. Late last year CIBC reached an $80 million settlement with the US Securities and Exchange Commission over certain financings that enabled Enron to inflate its profits. CIBC is now focusing on building up its Canadian retail operations. Analysts say it could eventually become the target for a takeover attempt by another Canadian institution.
Canada’s banks know they have to grow to compete in global markets, and some of that growth will come through acquisitions. Even the already concentrated home market could be fair game for further focus of financial power. Canada’s strict merger guidelines could be relaxed later this year by the new Liberal Party government of Prime Minister Paul Martin. In 1998, when Martin was minister of finance, he publicly opposed merger proposals by Royal Bank with Bank of Montreal, and CIBC with Toronto-Dominion Bank.
Analysts say, however, that Martin was merely carrying out the wishes of then-Prime Minister Jean Chrétien and that he is not philosophically opposed to big bank mergers.
Ralph Goodale, the new finance minister, is currently reviewing submissions from the banks on factors that the federal government should consider in reviewing merger proposals. Goodale, a long-time member of Parliament from Saskat-chewan, has indicated that protecting the public interest will be a key factor in the decision. He is slated to announce the government’s final policy on financial-sector mergers in June.
“There has been some hope among banking industry leaders that, with Martin serving as prime minister, the government will allow bank mergers to go ahead,” says Heather Wolf, banking analyst at Merrill Lynch Canada in Toronto. “Our view is that it will be some time before Martin takes a stand,” she says. “This is a political hot potato because the majority of the Canadian population opposes bank mergers and believes that the banks are charging too much for their services.”
For the time being, the Canadian banks are sitting tight and are unlikely to make any major US acquisitions until they know which way the government will decide on Canadian financial-services consolidation. If the merger path is blocked at home, certain banks will become more aggressive in acquiring US financial institutions, according to Wolf. “Canadian banks have the most excess capital of banks in any country,” she says. “They are accumulating capital at a very rapid pace, and they need to deploy it.”
Expanding into the US is the only practical option, analysts say. Even if Canada does allow domestic bank mergers to go ahead, there are only a handful of major banks in the country, and only one big merger is likely to get the nod.

Merger Ban Limits Options for Expansion
Canadian banks are also waiting to see if Ottawa will allow them to merge with insurance companies in order to create financial institutions that are big enough to compete in global markets. As it now stands, federal policy prohibits the big banks from merging with either of Canada’s two biggest insurers, Manulife Financial and Sun Life Financial Services.
“Sometime in April, I expect we will be completing the largest cross-border transaction in Canadian history,” Manulife CEO Dominic D’Allesandro said in a statement. In February the shareholders of Boston, Massachusetts-based John Hancock Financial Services approved the insurer’s takeover by Manulife in a $10.8 billion all-stock deal that was announced last September. If the merger goes ahead as expected, it will make Manulife the second-largest insurer in North America and the fifth-largest in the world. Manulife reportedly wanted to buy CIBC in 2002, but former finance minister John Manley rejected the proposed deal, which would have been the first of its kind in Canada.
The ban on mergers of large banks with large insurance companies is an artificial barrier to the evolution of the financial sector, and it should be removed, says Rick Waugh, president of Bank of Nova Scotia, or Scotiabank, which has operations in 50 countries. “Restrictive policies that protect the status quo will, over time, run counter to Canada’s interest in the ongoing liberalization of foreign financial-sector markets,” Waugh said in a submission to the government last December on its merger-review process. “The only effective policy is to allow Canadian institutions to grow stronger and more competitive today,” he said. “The recent merger between BankAmerica and FleetBoston is a reminder of how mergers continue to play a key role in the strategic plans of our competitors,” according to Waugh.
Since the BofA deal was announced, JPMorgan Chase has agreed to merge with Chicago-based Bank One, creating an institution that by itself is bigger than the combined market value of all of Canada’s five largest banks.
As the gap between Canadian and US banks widens, the Canadian banks fear they risk falling even farther behind as they wait for Ottawa to act. John S. Hunkin, president and CEO of CIBC, argued in a submission to the government that bank mergers with insurance companies would create “national champions” that would be able to compete more effectively at home and abroad.
The Big Five Canadian banks, along with National Bank of Canada, which operates in the French-speaking regions of the country, account for more than 90% of the assets of the banking industry. Canada has nationwide branch banking and an extensive network of automated banking machines that stretches across the continent. Analysts say the industry’s advanced technology and experience with nationwide banking could give Canadian banks an advantage in the US market, which is only beginning to coalesce into a nationwide system.
According to Royal Bank of Canada (RBC), the US is the most logical market outside of Canada in which to expand, given that it is the largest global economy and has similar culture and language to Canada, and the fragmented nature of its banking industry offers good potential for growth. The bank states in its 2003 annual report that its US revenues grew from 7% of overall revenues in 2000 to 27% of the total in 2003 as a result of its acquisitions in the US.
RBC has created a diversified financial services business focused on the southeastern US.
The acquisitions of Centura Banks, Liberty Life Insurance and the Dain Rauscher and Tucker Anthony Sutro retail brokerage businesses represented the first phase of an expansion strategy that RBC hopes to extend across the US. The bank’s Chicago-based RBC Mortgage subsidiary has the capability to do business in all 50 US states.

Opportunities and Pitfalls
Expansion can come at a price, though. To the surprise of many analysts, RBC recorded a net loss of $8 million from its US operations in its first quarter ended January 31, 2004, raising questions about its US growth strategy. At least three analysts cut their recommendations on the company’s stock. RBC attributed part of the loss to a 19% appreciation of the Canadian dollar relative to the US dollar from the first quarter of 2003, which resulted in a lower translated value of US dollar-denominated earnings. It also cited the expense of settling a dispute with Rabobank of the Netherlands relating to a $517 million swap transaction.
RBC’s US bank earnings were down $35 million from a year earlier in its first quarter to $4 million. This reflected a 52% decline in mortgage-origination volumes due to lower refinancing activity, as well as additional hedging costs at RBC Mortgage. “We are taking steps to improve returns from our banking operations in the US,” RBC president and CEO Gordon M. Nixon said in a message to shareholders. “Our expansion efforts in the US remain measured and disciplined, and we will continue to emphasize returns over size,” he said.
Nixon also told analysts that he would stick to the strategy of buying small retail branch operations, rather than pursuing a large US acquisition. Last November, for example, RBC bought 13 Florida branches from Provident Financial Group to add to RBC Centura’s 12 branches in the state.
Meanwhile, Bank of Montreal says that it plans to increase its footprint in the US but that its main goal is to grow in Canada. CEO Tony Comper says that finding growth opportunities within Canada is one of the bank’s biggest challenges. On a trip to Vancouver last December, he told reporters that the fragmentation of the US market and its enormous size mean that there are more opportunities in the US than can be found in Canada.
If the Canadian government gives the green light in June to further concentration of the financial-services industry, analysts say that RBC and Toronto-Dominion Bank, or TD Bank Financial Group, as the bank and its subsidiaries are collectively known, could be expected to be the aggressors. “RBC and TD have bigger market capitalization and retail branch networks than Bank of Montreal and CIBC,” says Wolf of Merrill Lynch Canada. The latter two banks are more likely to be acquisition targets, she says.
If there is a big bank merger in Canada, the winner will likely be required to divest some branches, analysts say. In that case, National Bank could be expected to pick up some of the pieces. And, while RBC and Bank of Montreal intend to keep nibbling away at the US market, analysts say that Toronto-Dominion and Scotiabank have indicated that they do not want to take small bites but would consider buying larger banks in the US with market capitalization of at least $10 billion.
If the Canadian banks simply sit back and let their US brethren get bigger and bigger, the day will come, analysts warn, when the tables turn as US banks start swallowing their friends to the north.