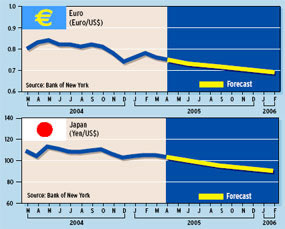 The Japanese, Chinese, South Korean and other Asian central banks have made it clear that they have no intention of dumping dollar-denominated securities and undermining the value of their massive reserve holdings.

It won’t necessarily take foreign central bank selling of US treasury bonds, however, to have an effect on long-term interest rates in the US, analysts say.

If the foreign central banks that are accumulating dollars as a result of their trade surpluses with the US simply stop buying as many new treasury bonds as they have in the past, US bond rates could increase significantly.

“If Asian central banks decide to invest less new money in the dollar, the lack of participation in primary US treasury bond auctions will be reflected in the bid-cover ratios at the auctions,” says Michael Woolfolk, senior currency strategist at Bank of New York.

“The Asians would no longer suppress the long end of the US yield curve, and the 10-year US bond yield would rise to around 5% or 5.5%,” Woolfolk says. 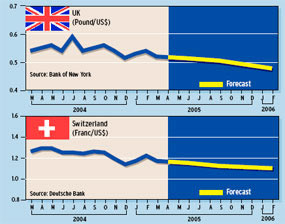 At about 4.5%, the current level of the 10-year US treasury bond is lower than it was at the end of last year and well below the 5.16% level when President Bush took office in January 2001.

Federal Reserve chairman Alan Greenspan said recently that he didn’t have a good explanation for why rates on long-term debt have fallen despite the ongoing effort by the Fed to increase the cost of borrowing.

“For the moment, the broadly unanticipated behavior of world bond markets remains a conundrum,” Greenspan said in testimony before Congress.

Since June 2004 the Fed has increased the overnight federal funds rate from 1% to 2.5% in six quarter-point steps. But the cost of home mortgages and long-term business investments has fallen.

Long-term rates would rise gently, without the risk of a bond-market collapse, enabling the economy to continue expanding with no threat to price stability, he says.

“This might curb some of the irrational appetite of consumers for real estate and lower the risk of a housing bubble,” Woolfolk says. 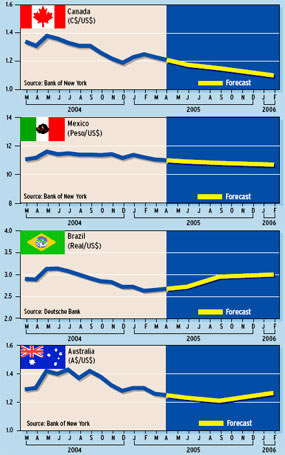 The dollar needs to decline further in order to boost US exports and to begin to reduce the US current-account deficit, he says.

“The dollar is not going to collapse like an emerging market country’s currency,” Woolfolk says. “And a revaluation of the yuan is not going to eliminate the US deficit with China, although it will make it more sustainable,” he adds.

The Basel, Switzerland-based Bank for International Settlements says its commercial and central bank statistics provide some tentative evidence that deposits placed abroad by banks in Asia are being increasingly denominated in currencies other than the dollar.

The BIS was careful to point out, however, that the evidence was far from conclusive in indicating a general shift out of the dollar by Asia overall. It noted that the absolute level of the region’s dollar deposits has continued to rise.

For all of the Asian banks covered in the BIS survey, the percentage of their deposits in dollars fell to 67% in September 2004 from 81% in the third quarter of 2001. 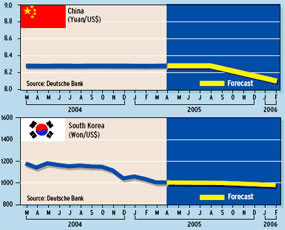 Citing BIS data, they note that trading in the yuan itself grew by 530% between April 2001 and April 2004, to about $1.8 billion a day. The level of yuan trading is still very low, however, and remains below that of trading in the Indonesian rupiah, for example.

Meanwhile, the Bank of Japan says it has no plans to diversify its reserve holdings. “This repeats previous Japanese statements, and matches past patterns,” according to Brown Brothers Harriman.

Details on the currency composition of Japanese reserves are not available, BBH says, but the available data suggest that most of the $437 billion increase in Japanese reserves over the past two years has gone into dollar assets.

Meanwhile, billionaire investor Warren Buffett, who is chairman of Berkshire Hathaway, said in his annual letter to shareholders last month that “US spendthrift behavior won’t be tolerated indefinitely.”

Buffett said that the dollar has further to fall and that the US trade deficit risks turning the US into a sharecropper society.

He said the trade gap and the growing dependence of the US on external financing could prompt the dollar to fall to such a degree that it would be unsettling to financial markets.