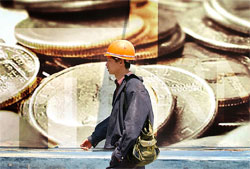 As activity in the project finance industry picks up, a handful of global banks are jostling to lead the market, while a host of local and regional banks, including China’s state-owned banks, are gaining a foothold. The race to lead the market is hardly surprising given the stakes. Global volume reached $170 billion last year—the highest level since 2000 and a 50% increase on the previous year. This year, volumes are expected to be at least as high.

BNP Paribas of France and Citigroup of the United States finished in a virtual tie for the lead as mandated lead arrangers of project finance transactions worldwide in 2004, according to London-based Dealogic ProjectWare, which maintains a global database. Citigroup was first and BNP Paribas second in global project finance loans, according to New York-based Thomson Financial, which put such borrowing at $116 billion last year, an increase of 67% compared to 2003. 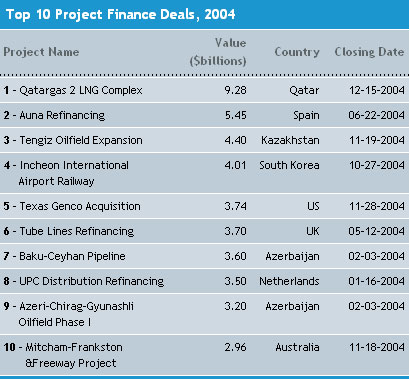 Bankers and industry participants say the revival of the market indicates that limited-recourse financing will remain an important technique to finance transportation infrastructure, electric-power generation and energy projects worldwide. “The basic strength of the project financing market is its ability to attain the proper allocation of risk,” says Christopher Hasty, managing director and global head of infrastructure and energy finance at Citigroup. “The advantage of limited-recourse financing is the access it provides to multiple capital markets, including equity and bond markets, bank loans, export credit agency programs and mono-line wrapped issues with insurance guarantees,” he adds. According to Hasty, all of these markets proved their worth during the difficult patches encountered a few years ago, showing they have fundamental strengths on which the project finance industry can draw.

A strong pipeline of transactions, particularly in the energy and infrastructure sectors, and a continued global recovery in power suggest that the project finance deal flow will be sustained throughout 2005. Four of the market’s major sectors—infrastructure, power, energy and metals—are rising simultaneously, Hasty says. “We saw an uptick last year, and I am hopeful for another uptick,” he comments. 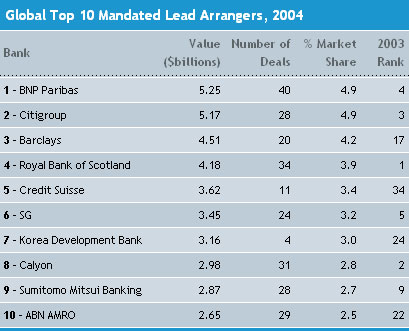 Few doubt that activity will grow again this year, but there are differing views on how much the market will expand. “We won’t see another 50% rate of increase in 2005, but the level of activity will be at least as high as last year,” says Christophe Rousseau, head of the project finance division at BNP Paribas. The expanding global economy is creating growing demand for oil and gas and other commodities, he says, adding that China’s demand for metals has been especially strong. BNP Paribas offers project financings of conventional and renewable power generation, oil and gas, refining and petrochemical and infrastructure, as well as telecom financings covered by structured finance.

The bank witnessed strong performance in all of its regional markets in 2004, and the Middle East and Australia were particularly active, according to Rousseau. High oil prices not only have improved the position of equity investors in energy projects, but also have boosted liquidity supplied to the project finance market from Middle East oil exporters, he says. “The current high level of oil prices doesn’t change how we look at project risk,” he explains. “We use conservative estimates of future prices, and we work with top-notch clients. We look for projects with the lowest-quartile costs, because they will most likely be a winning proposition,” he says. “We aren’t going to back a new energy project because of a short-term rise in oil or natural gas prices.”