April 01, 2005
Author: Paula L. Green
As the full demands of complying with Sarbanes-Oxley become clear, companies are increasingly calling for help to rein in the costs.
It’s only a three-sentence section tucked inside the 64 pages of the Sarbanes-Oxley Act—that sweeping piece of federal legislation aimed at curbing corporate corruption in public companies—but Section 404 is costing corporations at home and abroad billions of dollars in compliance costs and missed business opportunities.

The cost of complying with the controversial section, which forces companies to monitor the internal controls they have in place to ensure their financial reporting is accurate and requires outside auditors to vouch for those controls, can tally several million dollars for a mid-size company.

Although there is no formal movement to persuade Congress to revamp the legislation that was quickly pushed through in 2002 after financial scandals at Enron, WorldCom and others, the vociferous and constant complaints of companies—from giant multinationals to struggling start-ups—has finally forced the US Securities and Exchange Commission (SEC) to react.

While carefully noting that the federal securities agency is only implementing legislation mandated by the US Congress, SEC officials have take a series of steps aimed at easing the burden on the most vulnerable companies and simply listening to the woes of executives now facing onerous compliance costs.

The most definitive step taken by the SEC to relieve the burden was its decision in early March to extend the compliance dates for Section 404 for small US companies and foreign firms by a year, to July 15, 2006. SEC spokesperson John Heine says the agency extended the deadline in order to make sure companies implement the rule correctly. “We want to make sure that people are getting it right,” he adds.

The extra time also gives smaller companies a chance to see what steps a newly created SEC commission might take to temper the compliance burden. Established in December, the SEC Advisory Committee on Smaller Public Companies will examine the impact that the Sarbanes-Oxley Act and other aspects of the federal securities laws are having on smaller firms. Early last month the SEC named the 19 additional members of the committee after announcing the co-chairs in December. SEC chairman William H. Donaldson said the committee would look at whether the costs for small companies of complying with the regulations are worth the benefits.

Another step aimed at quelling the complaints surrounding Section 404 is an SEC decision to hold a roundtable discussion at commission headquarters in Washington this month. Attendees can vent their complaints at the April 13 meeting, which is open to the public. The commission is also accepting written feedback from company executives, auditors, investors and other parties on their experiences in implementing the Section 404 rule.

As a way to counter the CEO’s weight, firms are beginning to appoint a lead director of the board. This person does not have to be the board chairman but has the responsibility and power to monitor and challenge the decisions being made by the company’s top management.
Costly, But Beneficial 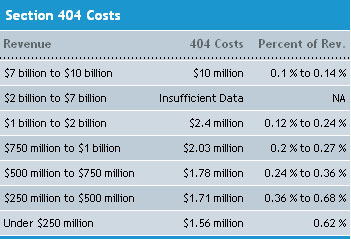 Even with all the costs and energy being expended in executive offices on both sides of the Atlantic, Sarbanes-Oxley can still offer managers the proverbial silver lining. For the heads of corporate information technology departments, compliance with the myriad regulations of the law can provide the ammunition they need to persuade their top managers to purchase comprehensive enterprise resource planning systems.

“Treasury departments are getting more support from top management on implementing more comprehensive platforms,” says Thomas Bergqvist, chief marketing officer at Trema Group in London, a technology supplier to large corporations in the US and Europe. “If you have four different systems, compliance is an extremely tedious process. Investing in a comprehensive system is sound risk management.”

Les Stone, an executive based in the Boston office of Accenture, also sees ways in which corporations can use some of the regulations of Sarbanes-Oxley to improve their overall performance. The law’s accelerated reporting requirements for corporate quarterly and annual financial results, for example, can be used by chief financial officers to get their financial information to Wall Street more quickly and earn a premium on their stock price in the process, says Stone, who is an associate partner in the consulting firm’s finance and performance management service line.

“If you’re going to spend all this money on compliance, companies need to learn how to manage the information and turn it into a good story that gives them a competitive advantage,” says Stone.