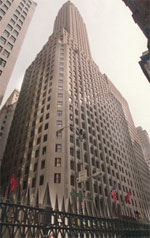 The US Treasury International Capital Systems, or TICS, report has become one of the most closely followed monthly data series in the financial markets at a time when many investors are worried about funding the current account deficit. The dollar jumped last month when the report showed that foreign investors plowed a near-record net $91.5 billion into US stocks and bonds in January. That was more than $20 billion above the most-optimistic of analysts’ forecasts.

The dollar dropped the next day, however, on news that the US current account deficit widened in the fourth quarter of 2004 to a record $187.9 billion. The deficit for all of last year was $665.9 billion, also a record. “Foreign investors have not lost their appetite for US securities,” says Michael Woolfolk, senior currency strategist at The Bank of New York. January was the strongest month for net purchases of US equities by foreign investors since May 2001.

According to Woolfolk, the dollar’s recovery in January from record lows in December not only was a technical rebound, but was driven by real money flows.

The source of that money, however, was somewhat mysterious. It didn’t come from Asian central banks, at least not directly. Japan was a net seller of $5.6 billion in US treasury securities. China and South Korea, other big holders of dollar reserves, also were net sellers of US treasuries.

Net capital inflows from the Cayman Islands of $18.6 billion in January included $6.7 billion of US treasury bonds. A $20.7 billion inflow from Bermuda was mainly in US treasury securities.

Recent large transactions through Caribbean tax havens, often attributed to hedge funds, could include some central bank buying, Woolfolk says. “Why the central banks would redirect official flows isn’t clear,” he says. “It needs to be studied.”