Newsmakers : Can Sir Howard Stringer get Sony Back on Course? 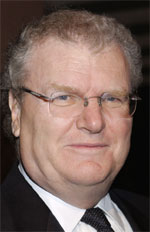 Sir Howard Stringer, the Welsh-born head of Sony America, has been named chairman and CEO of the Japanese parent company. The gaijin CEO, rare in Japan and a first for Sony, may implement some drastic turnaround measures that would have been difficult for a Japanese manager to implement.

The genteel Sir Howard, known for his people skills and sense of humor, will wield the corporate axe with an iron hand and kid gloves. He also will have to resolve Sony’s identity crisis. Is it an entertainment company or an electronics company, or both?

Now that the Sony Walkman has been displaced by the Apple iPod, the Japanese company is losing its reputation for being first to market with the latest technology and quality products.

The Oxford-educated executive was appointed to Sony’s top position only weeks after the company warned that profits at its electronics division would fail to meet their target for the second straight year.

Sir Howard already has been credited with breaking down the management silos between Sony’s US entertainment and electronics operations, and he just might have the vision to steer Sony successfully into the broadband age.

Last year, he oversaw the purchase of Metro-Goldwyn-Meyer and its film library. Now he has to find a way to convince consumers to tap into Sony’s media cache with advanced devices, such as the popular PlayStation Portable game console.

Sir Howard, a former journalist who became president of CBS, has nine individual Emmys to his credit and is firmly grounded in the content side of the business. However, the decorated Vietnam War veteran has the guts, the talent and the versatility to succeed in his latest multicultural, and multi-media, challenge of helping Sony to realize its global potential. He plans to live in the UK with his family and travel regularly to Tokyo and New York.