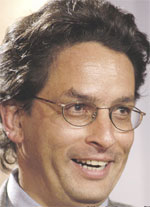 Finance minister Alberto Carrasquilla of Colombia has pulled out all the stops to keep the country’s currency from rising against the slumping dollar. Sadly, nothing seems to work.

The peso rose 16% last year, making it one of the strongest currencies in the world, to the chagrin of the country’s exporters, who complain they are losing their competitiveness despite a new free-trade agreement with the US.

Last year, the government and the central bank bought more than $3 billion in US currency in an attempt to curb the peso’s rise. The central bank slashed interest rates three times, bringing the benchmark rate down to 6.5%, but still the peso rose.

Last December, President Alberto Uribe signed an executive order restricting the inflow of short-term investments by requiring international investors to keep their money in the country for at least a year. The capital controls proved virtually useless in stemming the peso’s appreciation and will be abandoned within the next few months, Carrasquilla said in a recent interview with US news service Bloomberg.

The latest plan is for Colombia’s central bank to sell the government at least $1 billion in foreign reserves, which the government will use to help prepay international debt, Carrasquilla says. The dollar reserves were accumulated during the central bank’s foreign exchange market intervention.

Colombia’s central bank is independent by law, but Carrasquilla is president of its seven-member board. He says that prepaying debt will help meet the International Monetary Fund’s requirement that Colombia trim its debt to less than 40% of gross domestic product. Draining off the central bank’s reserves could also spur some peso selling. Meanwhile, Carrasquilla says, the central bank will keep buying dollars.