Corporate Finance : Foreign firms take up slack in us market

New issuance of high-yield debt in the US corporate market fell sharply in February to about $4.8 billion from $13.5 billion in January, according to Montpelier, Vermont-based KDP Investment Advisers. There was no lack of foreign companies, particularly Brazilian firms, however, which rushed in to take up the slack by issuing debt in the US market.

Nashville, Tennessee-based HCA, the leading US provider of healthcare services, issued $1 billion of senior notes due in 2016 with a 6.5% coupon. HCA operates 182 hospitals and 94 surgery centers in 22 states. The global issue, which was also the largest in the US high-yield market in February, was a public offering, rather than a private placement. Citigroup and Banc of America Securities were the underwriters.

Linens ’n Things, Clifton, New Jersey-based national retailer of bedding and home furnishings, issued $650 million of floating-rate notes. This was the largest private placement in the US high-yield market in February. Linens ’n Things entered into a definitive agreement in November 2005 to be acquired by Apollo Management and other investors in a leveraged buyout.

Meanwhile, Brazilian companies, seeking to escape that country’s high interest rates, are taking advantage of lower borrowing costs in the United States. The law firm of White & Case represented three Brazilian companies in connection with US debt issues that closed in February. Brazil’s announcement in January of Brady bond buybacks and recent ratings upgrades have improved the climate for Brazilian borrowers.

Grupo Friboi, one of Brazil’s largest beef producers, offered $275 million in guaranteed notes pursuant to Regulation S. São Paulo-based Grupo Friboi acquired a controlling interest in Swift Armour, based in Buenos Aires, in September 2005. The purchase of an 85% stake in the Argentinean company will allow it to gain greater access to the European market for its beef exports.

Centrais Elétricas Matogrossenses, or Cemat, and Centrais Elétricas do Pará, or Celpa, two Brazilian electricity distribution companies that are part of Grupo REDE, placed $100 million of notes in the US market.

Earlier this year, Brazil’s largest government-owned bank, Banco do Brasil, raised $500 million in perpetual notes in the US market at a record low interest rate of 7.95%. The issue, which was managed by Citigroup, was increased from an original $300 million.

Emerging market global bond issuance, including government, corporate and bank issues, in the first two months of 2006 was $20.4 billion, according to Merrill Lynch. On an annualized basis, this could signify almost $120 billion in new emerging-market issuance for the year as a whole, it says, up from $98.1 billion in 2005.

Despite rising yields on US corporate debt in tandem with increases in US treasury bond yields, foreign companies are borrowing before these rates go even higher. At the same time, they are taking advantage of spreads over treasury securities that are near the lowest of the year.

The default rate on US high-yield bonds fell to 2.2% in February from 3.1% in February 2005, according to a report by Moody’s Investors Service. 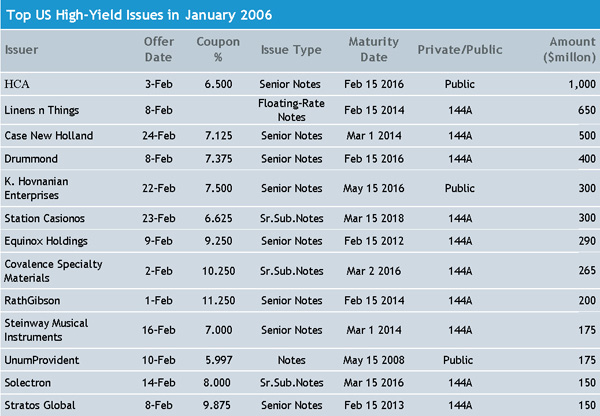