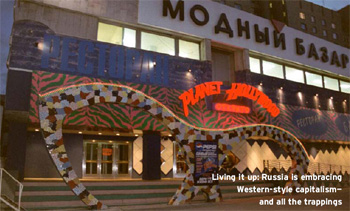 Booming hydrocarbon exports, GDP rising at over 7% a year and a rapidly growing middle class—all of these factors and more have made Russia a good place to be a banker in recent years. Domestic banks report record profits while international banks pour money and people into their Russian operations. It wasn’t always thus. Walking Moscow’s streets these days, it is sometimes hard to remember that it has been less than a decade since the country defaulted in its international debt, the stock market plunged, and banks shut shop before depositors could get their money back. Apart from a few of the bravest souls, most overseas houses either left town or cut their operations to the bone. The climb back has been uneven: Money from the natural resources boom has trickled down unevenly, and whole sections of Russian society have been left out entirely. But the direction of travel is as unmistakable as the momentum is powerful. Rising corporate earnings and investment have created demand for a range of new corporate finance and fund-raising services. The Kremlin-inspired reshaping of the commanding heights of Russian business has not only thrown off a host of mergers and acquisitions—traditionally among the most lucrative of investment banking activities—it has also typically been accompanied by blockbuster financings, carried out in the loan and eurobond markets. In fact, so dramatic has the growth been in these financings that the Russian finance ministry, worried by swelling volumes of foreign currency debt, has threatened to put a cap on borrowings. Few outside the ruling elites would deny that Russia’s natural resources are skewing growth, but the growing integration of the country’s top companies is spurring growth and innovation in trade and commodity-related business. Foreign exchange volumes also are a beneficiary of these strengthening international links. The money flooding the coffers of Russia’s top companies is having other effects on financial markets, too. Excess liquidity is driving asset prices up and returns down. In few places is this more marked than in Russia’s supercharged bond markets. Here, the demand for yield has sucked in issuers ever-further down the credit curve. That liquidity is also moving prices on other asset markets. Real estate prices in Moscow and a few other metropolitan areas are rising fast. Cash is still king in many areas of Russian life, and it is common for houses, autos and other big-ticket purchases to be paid for outright. Increasingly, though, Russians are getting the plastic habit. Credit cards are now widely available, as are mortgages at ever-longer tenors. International experience in the forms of credit-scoring models and databanks is beginning to professionalize the markets for consumer finance, though few would bet against some hiccups along the way. The Russian banking sector remains distorted by peculiar factors—the predominance of state-owned behemoth Sberbank for one, the persistence of banks as in-house treasuries for another—but increasingly the transmission of money from savers to borrowers is being conducted in a manner that would be recognized elsewhere in the developed world. Global Finance’s annual awards once more recognize the leaders in that process.