April 01, 2006
Author: Joseph Giarraputo
While they are wallowing in petrodollars from $60-per-barrel oil, some of the more forward-looking Gulf states are planning to ease themselves off their own addiction to oil.. 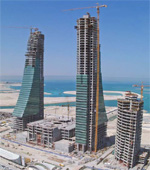 Soaring oil prices have brought a historic transfer of wealth to the countries of the Middle East. Estimates are that the major oil producers will take in more than $300 billion from hydrocarbon exports in 2005 and 2006. While the details differ from country to country, this wealth is being spent on roads, ports, hospitals, schools and other infrastructure. Another major chunk is going into investments at home in real estate and local stock markets. Abroad, investments are being made in the United States, Europe and Asia and include US treasuries as well as real estate in Paris, London and New York.
However, for the first time, Arab investors, who once invested their petrodollars abroad or in T-bills, are returning to the Middle East, eager to seize the next big investment opportunity in what is still a relatively untapped market. “The paradigm is shifting, and
an opportunity is being created in emerging markets,” says Arif Naqvi, executive vice chairman and CEO of Dubai-based Abraaj Capital. “I don’t think it is a temporary phenomenon. There is a lot of liquidity that is driven in part by high oil prices and the strong performance of stock markets, but it is also driven by the fact that Arab investors have begun to realize it is easier to invest closer to home.”
But it is not just Arab investors that are turning their focus to the Middle East. International institutional investors are also eyeing the market seriously for the first time, as witnessed by the recent round of fundraising for Abraaj Capital’s second Buyout Fund (ABOF II), the largest fund ever to be raised in the Middle East. Investor demand for the fund reached $900 million, although the fund eventually closed at its original target of $500 million.
In addition to interest from high-net-worth individuals and family investors, for the first time the fund attracted international institutional investors, which contributed 60% of the total funds raised. “There is a perception of growing maturity in the region,” Naqvi comments. He believes that the renewed focus on corporate governance and implementing a transparent and world-class regulatory infrastructure is transforming institutional investors’ perceptions of the region.
It wasn’t always that way, though. “The region’s continued reliance on oil, aid and other strategic rents allowed it to delay implementing deeper and more difficult reforms,” says Mustapha Nabli, chief economist, Middle East and North Africa, at the World Bank. The low levels of FDI the region historically attracted mirrored the region’s oil dependency. Between 1984 and 1998, according to World Bank figures, FDI constituted less than 1% of GDP in the Middle East, compared to 3% to 4% in most other developing countries.
The publication of the first Arab World Competitiveness Report in 2002, which stated that 100 million jobs would need to be created by 2017 just to maintain the same levels of employment that exist today, was a wake-up call to the region. The biggest challenge the Middle East now faces is finding economically self-sustaining ventures that will keep the population meaningfully employed. And over time this problem will become exacerbated, as populations within the region are growing at a much faster rate than the developed world. The UN predicts that the population of the oil-rich Gulf Cooperation Council countries, including Kuwait, Qatar, Oman, Saudi Arabia, Bahrain and the United Arab Emirates, will increase more than half by 2025, compared to a 3% increase in the more developed countries.
There are questions, however, about where the economic and employment growth will come from, and whether the region can continue to rely on high oil prices to sustain future growth. One day, oil may run out, and over the next five years oil prices are predicted to drop to $25 to $30 a barrel. Adel A. El-Labban, group CEO of Bahrain-based Ahli United Bank, asks: “What do you do with the revenue? What are the areas of local investment that are sustainable at the time when revenue and demand will adjust to reduced oil prices or at least their rate of increase? This represents both a great opportunity and a great risk.”