April 01, 2006
Companies in the Philippines recovered quickly from the recent turmoil, and the economy continues to prosper. 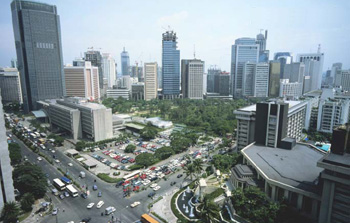 Business as usual,” proclaimed President Gloria Arroyo as she closed another chapter in the Philippines’ lengthy history of coup plots after a hectic week of emergency rule in Manila in which troops stood guard at military bases and in the streets and protesters accused the president of imposing martial law by default.

Business was, indeed, largely unfazed by the week of political turmoil that came to a close on March 6. The stock market even put on 3.3% in four trading days while the emergency was in place, perhaps helped by the fact that Arroyo turned out at the Philippines Stock Exchange while the state of emergency was still in force. But the International Monetary Fund (IMF), which coincidentally had just completed a review of the economy, released a gloomy report pointing to underlying problems, particularly related to debt, that any degree of political instability will inevitably make more difficult to solve.

It was only last October that business was looking forward to a more stable climate. Arroyo had just survived an attempt to impeach her over alleged comments to the head of the electoral commission before her election. Her government was not only promising but also implementing reforms to make the country more business-friendly. They included steps on good governance and banking standards. There were signs the changes were working. According to the central bank, foreign direct investment shot up 65% to $1.1 billion on the back of interest from the United States and Hong Kong in manufacturing and real estate. Arroyo has also made strides in cutting the deficit with new taxes and conservative spending policies. According to the Philippine central bank, the budget deficit fell from 5.3% in 2002 to 3.2% in 2005 and is projected to fall to between 2% and 2.5% this year. Growth hit 5.1% in 2005, down from 6% the previous year but still respectable. It was factors such as these that helped maintain investors’ confidence through the period of emergency. There’s no doubt the enthusiasm exists for an upswing.

The IMF report recognized as much. “Fiscal performance in 2005 was substantially better than target,” it noted, adding that the slashing of the deficit to 2.7% was well ahead of the 3.4% target. “The Philippines faces two key challenges going forward—namely, to strengthen its defenses against the remaining significant short-term vulnerabilities, and to move the Philippine economy to a higher and more sustained economic growth path,” an IMF executive board assessment said. “With its still high debt levels, the Philippines remains vulnerable to a sudden turn in the current benign external financing environment. In addition, further spikes in oil prices or an outbreak of avian flu pose additional near-term risks,” the IMF added. It put external debt at 80% of GDP, among Asia’s highest. Services such as business process outsourcing, telecommunications and tourism remain key growth drivers, the IMF said, but it described electronics growth as “anemic” and below regional trends.

The Fitch ratings agency also warned that political turmoil would threaten economic growth. There was an “urgent” need to reduce the deficit, the agency said, but progress might be disturbed by political necessities. “This is one of the countries where politics matter, and it is central to our assessment. Politics affect economic policy,” James McCormack, head of Asia sovereign ratings at Fitch, says. He points out that the country’s rating is likely to come under new pressure. Of particular concern is the country’s fiscal position, with interest debt payments taking up almost 40% of state revenues, he explains. If effective interest rates on debt rise, more and more revenue will need to be pumped into debt servicing.