Global Finance unveils its annual list of the best banks in developed markets around the world. 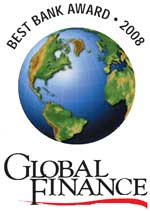 The past year has been one of the most tumultuous in recent memory for the banking sector. After the boom time of 2006, last year—or, more accurately, the latter half of the year—became increasingly fraught for many banks. While the subprime mortgage crisis directly affected only a limited number of mainly US institutions, its repercussions have emphasized the unprecedented links between different economies and markets and put future bank profitability and growth under severe strain.

The subprime crisis sparked a wider credit crunch in some markets—most notably the United States and the United Kingdom, where central bank action has been necessary to try to ease liquidity problems. In addition to the difficulties banks suffered in the short-term markets, the re-rating of banks by rating agencies and investors—financials are decidedly not in vogue—has made longer-term finance more expensive and less accessible. There are no indications that this will change soon. Meanwhile, the ramifications of the subprime crisis itself have been startlingly broad in their reach. The banking sector, including many household-name commercial banks, were substantial buyers of sophisticated structured credit products such as collateralized debt obligations that were partly constructed from subprime mortgages. And while it has been investment bank write-downs for structured credit that have grabbed the headlines, many commercial banks have also had to take a hit.

Other consequences resulting from the subprime crisis and credit crunch are still working themselves through the system. Higher lending costs for consumers and businesses, as banks have faced higher borrowing costs, are slowing down many economies around the world. Analysts and economists are currently debating whether the US is already in recession. If it is not, it soon could be. And as US growth slows, consumer spending will fall, creating a vicious cycle that will hit company profits and slow growth, affecting the global economy.

Finally, banks—already hammered in recent years by regulatory dictates such as the Basel II capital adequacy rules, which aim to strengthen the soundness and stability of the banking system and undoubtedly have been beneficial in their effects on the current crisis—are likely to face even greater regulatory scrutiny as a result of the current financial debacle. In markets where regulators have maintained a light touch or encouraged financial institutions to govern their own affairs, the excesses of the subprime and structured credit market have led to calls for tighter regulation that will most likely increase costs for banks.

In its short-term effects, the latter half of 2007 was nothing short of a nightmare period for many banks. However, that nightmare was balanced by what was an immensely profitable first half—which in many cases resulted in overall growth and increased profitability over the full year. As a result of the timing of these awards, a number of banks had yet to report full-year results, and consequently the awards come with the caveat that the banks appeared to be the best in their country at the time of assessment. As ever, the editors of Global Finance made these awards after extensive consultations with bankers, corporates and equity and credit analysts worldwide. Our criteria included a range of factors: growth in assets, profitability, geographic reach, strategic relationships, new business development, innovation in products and—vitally this year—the ability to weather an economic and financial storm.

Banks winning a Global Finance award should feel as proud as they ever would about the achievement, although in a handful of cases the awards this year do not amount to a wholehearted endorsement of what that bank has achieved. Nevertheless, the awards once again pay tribute to the ingenuity and dynamism of what has become a heavily lambasted sector. We are confident that next year’s awards will see that resourcefulness put to good use in the cause of the rehabilitation of the banking sector.

This article appeared in issue April 2008