Asia’s economic powerhouses are shifting to a new economic model. The transition will be painful—but will also pay huge dividends.
By Thomas Clouse 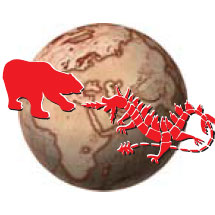 A Painful Transition Looms
Most economists and policymakers probably would agree that Asia could benefit from more domestically driven economic growth, but the transition from its current growth model will not be easy. Tom Byrne, a senior vice president at ratings agency Moody’s, explains: “The export-oriented firms are the most productive and profitable, having subjected themselves to global competition. There would need to be a reorientation in market focus and product mix. Emerging markets may have insufficient market size or income levels to substitute for the loss in global markets.”
Greater intra-regional trade could help alleviate some of these problems, especially for Asia’s smaller countries, which do not have market size to support domestically driven growth. The recent summit of the Association of Southeast Asian Nations (ASEAN) offers some signs of movement in this direction. The group of 10 countries agreed to form an integrated economic community by 2015, similar to the European Union but without a common currency. While challenges remain, in terms of wealth discrepancies in particular, the Asean community could eventually provide substantial opportunities for its members to build off each other’s strengths.
Japan, China, Korea and Asean have all been active in pursing markets outside of Europe and the United States as well. Asean signed a free-trade agreement with Australia and New Zealand last month, and Japan and China have both sought trade agreements with South American countries. Monitor Group’s Chakarian explains the rationale behind such agreements: “Instead of everything going through the US and Europe, developing countries can create a sustainable market, with products and information flowing between China and Brazil, India and other emerging economies. In this way, they can significantly reduce their dependency on the developed economies. This crisis, which originated in the so-called developed world, will foment that movement.” 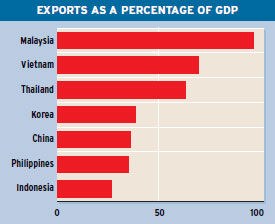 Stronger domestically driven demand, increased regional integration and expansion into new markets can all help Asia to prosper in the long run. But ultimately, the exceptionally high growth rates achieved through Asia’s export-oriented growth model will be tough to duplicate. Moody’s Byrne puts it simply: “The implication is for slower long-term growth, whether an economy becomes less export dependent or not.”
If long-term growth will be slower in any scenario, one might wonder why Asia should take steps to move toward domestically driven growth. Ultimately, though, it is the people of Asia who would benefit most from rebalancing the region’s growth. By keeping money at home, rather than sending it overseas, Asia can invest in its own development. And as the service sector develops, more money will go toward wages, boosting living standards and buying power.
A December report by the Asian Development Bank emphasizes the need for such adjustments, regardless of the global economic situation: “The global financial crisis has not created the need for developing Asian countries to rebalance their economies. What the crisis has done is add a much needed sense of urgency to a need that was already there. More balanced growth is in the best interest of developing Asia’s own growth and development in the long run. The fact that it helps to mitigate global imbalances is a positive byproduct, albeit an important one, especially in view of current circumstances.”
This mitigation of global imbalances will reduce the buying power of Western markets. The implications for Asia are immense. The dazzling economic achievements of Japan, the Asian “tiger” economies and, more recently, China, India and the region’s other developing markets all grew from the region’s export-centered growth model. This model, however, has not only lost its traction in the current economic crisis but is unlikely to regain its economic muscle even when this crisis eventually passes.
For this reason, Asia needs a new economic growth model. Defining that new model and making the transition to it will be challenging, and the model will not be the same for all of Asia’s countries. But domestic demand, regional integration and new trade markets will be essential ingredients. The ongoing global rebalancing, complemented by the establishment of more balanced economic models, will allow the people of Asia to continue enjoying their leading role in the 21st century global economy.