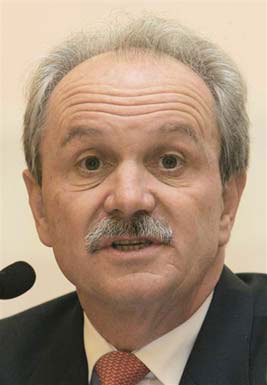 Jean-Pierre Roth, the low-key chairman of the Swiss National Bank, is not the type of person you would expect to shock the financial world. But that is exactly what he did on March 12 when he confirmed that the bank was “implementing its intention to buy foreign currency,” or in other words, it was selling the Swiss franc.
While central bank intervention in the foreign exchange market often fails, particularly when a country is trying to support the value of its currency, it can succeed when the goal is just the opposite. After all, the central bank can print as much money as it wants, whether or not it has anything to back it up.
To drive home its point, the SNB simultaneously cut its benchmark interest rate to 0.25% and announced a policy of quantitative easing to counter deflationary pressures. It cited rapid deterioration in the economy and the risk of negative inflation over the next three years. The SNB that day stepped out of the shadow of the European Central Bank.
Roth, a 30-year veteran of the SNB, only two weeks earlier announced his intention to retire at the end of this year. No mention was made of the trouble in the Swiss banking system, including massive losses at UBS and an investigation by US prosecutors into whether the Swiss bank helped thousands of Americans avoid paying taxes.
Switzerland has agreed to ease its bank-secrecy laws to cooperate with foreign authorities on a case-by-case basis. On March 13 the Swiss government agreed to abide by standards on information-sharing between countries that have been developed by the Organization for Economic Cooperation and Development to eliminate tax havens.
Meanwhile, the SNB’s currency-intervention gambit was immediately successful, with the Swiss franc plunging 8% in a single day. The depreciation of the franc was a blessing for the currencies of Central and Eastern Europe, such as Hungary, where franc-linked loans are common. The cyclical downturn in the region is deepening, and the SNB may just have done its neighbors—as well as itself—a favor.