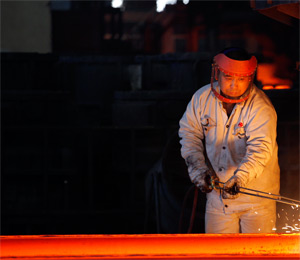 Faltering growth in some of the world’s biggest economies may be grabbing the headlines, but it is soaring commodities prices that currently pose the greatest threat to the global economy’s continuing recovery, according to analysts and policymakers. After pushing above $100 per barrel, oil is already trading close to the price levels where historically it has begun to affect US consumer behavior. A determined move up from current levels could have a more widespread impact: Deutsche Bank analysts believe $150 per barrel could prove a tipping point for continued global economic growth.

While there is no consensus on where prices will go next, most analysts agree supply is tight due to the combination of popular uprisings across North Africa and the Middle East and traders’ uncertainty over how much extra oil Opec can really deliver.

But it is not just energy prices that are threatening to derail the global economy. China’s appetite for industrial metals has helped power sharp rises in the prices of copper and iron ore, pushing the Dow Jones–UBS Industrial Metals Subindex up nearly 120% over the past year. Iron ore prices are nearly double those seen early last year, and spot prices have reached an all-time high of $190 per ton during the past year.

Prices of soft commodities have also gone through the roof. Raw cotton has risen by more than 45% already this year. Commodities analyst Sudakshina Unnikrishnan at Barclays Capital points to continuing strong demand from China and other textile manufacturers, while supply has been limited by export restrictions imposed by India (the world’s second largest cotton producer), floods in Pakistan and poor growing conditions in US southern states.

Grain prices are also elevated. Wheat has been rising since last summer, when drought-stricken Russia and Ukraine introduced restrictions on exports. And, unless the heavens open soon, China’s wheat belt will have a poor harvest this year. But it is corn where, according to Unnikrishnan, supply looks tightest. Historically low stocks, poor harvests in the southern hemisphere and low estimates of planting in the US are contributing to short-term constraints. Chicago Board of Trade corn futures have nearly doubled over the past 12 months. With the prices of sugar, coffee and cocoa rising fast, the UN Food and Agriculture Organization’s (FAO) Global Food Index reached a record high in February. As the IMF recently warned, “The world may need to get used to higher food prices.”

Yael Selfin, head of macro-consulting at consultant PricewaterhouseCoopers, suggests that “current uncertainty is being driven not so much by the fundamentals of supply and demand as by political risk and psychology, which leads to either government hoarding of foodstuffs or speculation.” In such an atmosphere, she reasons, “adverse weather events or tension in the Middle East have a multiplier effect on the psychology of market traders, creating heightened volatility, and of governments, which bring in export bans or import replacements.”

In this atmosphere, adverse events “have a multiplier effect on the psychology of market traders, creating heightened volatility” – Yael Selfin, PwC

Another key driver of the commodities boom is excess liquidity. Anton Stroutchenevski, senior economist at the Russian investment bank Troika Dialog, explains: “The shift in commodities prices is supported by quantitative easing in the USA and, to a certain extent, in the EU. That’s creating huge liquidity, which puts inflationary pressure on commodity prices.” In response, the EU Competitiveness Council recently met to address means of curbing “speculation in commodities markets” and “excessive concentration in the mining industry.”

But not everyone is suffering. Commodities traders are flourishing, while investors in some specialist hedge funds have seen returns of between 5% and 7.5% in a single month.

Assuming that this is a temporary spike and the world will not be tipped back into recession, at what level will prices stabilize? Unnikrishnan sees agricultural commodities remaining in a higher trading range. And while Stroutchenevski accepts that currently oil prices include a political risk premium, he adds: “Even if that settles down they will remain at higher levels, closer to $100 a barrel, than was true in 2010.”

For the economies of Central and Eastern Europe (CEE), which taken together cover close to two-thirds of the Eurasian landmass, the commodities boom is a decidedly mixed blessing. For resource-rich counties like Russia or Kazakhstan it provides immediate uplift but is also likely to fuel inflation. “Russia should be able to balance its fiscal budget this year if oil averages around $105,” observes Stroutchenevski, “Going forward, less will be needed to finance the deficit.” Likewise, he sees the commodities boom as “positive for Kazakhstan in terms of both its current account and achieving a budget surplus this year.”

But for the vast majority of CEE states, which are net importers of both food and energy, the surging prices pose severe challenges. “It will hit the poorest countries hardest, as food and energy costs represent a larger share of the overall consumption basket,” says Alexander Pivovarsky, a regional economist at the European Bank for Reconstruction and Development (EBRD) who specializes in Eastern Europe and the Caucasus. “Likewise, their industries are characterized by relatively low labor productivity, so the commodities component in their price structure and competitiveness is correspondingly large.” Wolfgang Ernst, an analyst at Vienna-based Raiffeisen Bank International, says: “For CEE markets, the impact of fuel and energy price increases is more severe than in the developed economies. They will be more affected by imported inflation than countries within the eurozone.”

Ernst says the commodities spike is likely to have a more severe impact in Bulgaria, Serbia and Hungary than in countries with more diversified economies, such as the Czech Republic, Poland and Slovenia, which are also more closely integrated with the EU. “But all countries dependent on energy imports face higher input costs, and this will inevitably have a negative effect on their exports,” he comments.

"This will inevitably have a negative effect on their exports" – Wolfgang Ernst, Raiffeisen Bank

For oil importers, such as Ukraine and Belarus, it will be painful, says Stroutchenevski: “Current-account deficits will go higher, and it is negative for both their currencies and bond rate stability.” According to Pivovarsky the impacts will be felt most in the CEE countries, particularly in the Balkans and Caucasus, that are not resource-rich and are still recovering from output losses resulting from the last recession. However, because of their underutilized capacity, there is little risk of rising pressure on wages feeding through into an inflationary spiral, he adds.

But that is only true of core inflation, he points out. In Bulgaria, for instance, while core inflation is barely positive at 0.5%, the headline figure, which takes account of higher commodities prices and administrative price hikes, hovers around 4%.

How best to deal with imported inflation poses a difficult conundrum for central bankers across the region. Ernst notes that rather than immediately raising interest rates to bring down headline inflation, CEE countries are looking beyond inflation data to growth rates and unemployment figures. “The Czech Central Bank can’t do anything to counteract imported inflation,” Ernst says. “Like many others, it views that as an external shock.” Rather than relating to core local economic conditions, interest hikes across the region are a response to the tightening of policy at the European Central Bank, Ernst believes. “If the ECB raises its rate, so will the Czechs and others as they need to maintain a certain premium over euro interest rates,” he says.

And it is heightened inflationary expectations and rising interest rates that pose the greatest threats to continuing growth. “That’s when it hits the real economies,” says Selfin, who sees countries where inflation is already high or rising, such as Turkey, Hungary and Romania, being most at risk. The Czech Republic, Slovakia and Slovenia are more on top of it, he believes, despite being energy and food importers. Thus far, though, the gradual recovery across the region has not been derailed. “Trade is moving along well in Central European countries where economic growth is mainly driven by exports,” says Ernst. But he also notes that the so-called catch-up momentum, which until 2007 saw Central European economies growing 4-5% faster than the eurozone, has eased to today’s 2% growth differential. “We are now waiting for a combination of investment and domestic consumption to kick in.”

"Fast-rising imported inflation may cause social tensions, if not food riots"

"This could be made worse if their government or central bank’s response is to raise interest rates" – Alexander Pivovarsky, EBRD

Inflation is also an issue among the resource-rich nations that are the immediate beneficiaries of high commodities prices. “The main impacts of the surge in oil and gas prices are improvements in the terms of trade for major exporters like Russia or Kazakhstan and inflows into their sovereign wealth funds.” says Franziska Ohnsorge, the European Bank for Reconstruction and Development’s senior economist responsible for macroeconomic forecasting. “If—admittedly a big if—these are managed in a macro- stabilizing manner, the trickle-down in the short term will be limited, both to the majority of consumers or to companies operating in the non-oil economy.” Nor will surging energy prices necessarily resolve weaknesses in the financial sector. In Kazakhstan, where a number of domestic banks got into trouble following the global financial crisis and a local real estate and construction crash, Ohnsorge suggests the upswing in oil and gas revenues may help the energy sector, but she points out that many nonperforming loans were in sectors other than energy. She also notes that, although Russia’s resource-fueled economy is growing again, the growth is accompanied by capital outflows, which suggests there is investor concern about the strength of the economy over the longer term. Stroutchenevski agrees that “the investment community is more cautious toward Russia than in 2007–’08,” but he argues that could change. “With a balanced budget and lower inflation, we expect capital inflows to resume in the second half of this year.”

Russia may even be able to return to its traditional role of a major food exporter, especially to Middle East. Stroutchenevski says 2010’s drought and the halving of agricultural output seems to be a one-off event. “As conditions return to normal, we will see significant growth in the third quarter,” he adds. Pivovarsky is more skeptical, seeing restrictions of food exports introduced by Russia and Ukraine as “being disruptive and possibly a disincentive to farmers to plant those crops next year.”

There is also concern among analysts that sudden hikes in food and fuel prices may trigger protests in some of the region’s poorer countries. “Fast-rising imported inflation may cause social tensions, if not food riots, in some of the poorer countries in the region, and this could be made worse if their government or central bank’s response is to raise interest rates,” says PivovarskyAmong the major oil and gas producers of Central Asia—Kazakhstan, Uzbekistan (which also stands to benefit from higher cotton prices,) Azerbaijan and Turkmenistan—the current spike in energy prices, magnified as it is by popular protest and instability across North Africa and the Middle East, presents challenges as well as windfall revenues. All of these countries are ruled by long-serving and, by most accounts, autocratic presidents, and the possibility of contagion from the Arab world has spurred them to introduce a combination of populist and repressive measures.

“Turkmenistan has recently launched a crackdown on youth, with students confined to their dormitories by 8pm and membership of Facebook banned,” says Gemma Ferst, analyst at risk consultants Eurasia Group. Azerbaijan has announced an anti-corruption campaign to defuse long-standing grievances. Uzbekistan keeps a firm lid on dissent—memories of the brutal suppression of the last uprising in May 2005 remain fresh. Kazakhstan’s president has opted for an almost uncontested election in April as a sop to democratic values rather than continuing to rule uninterrupted until 2020, as previously envisioned.

So while there are clearly winners and losers across CEE and Central Asia, even those who seem to reap immediate benefits from high energy and food prices are fearful of unexpected consequences over the long term.