Recent events in the Middle East and North Africa have brought political risk into sharp focus for multinationals in the region and beyond. 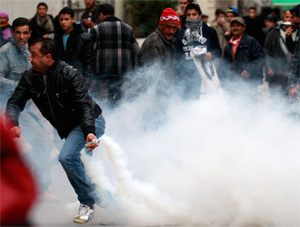 It was the morning after the Japanese earthquake, and David James and the rest of the team at Ascot Underwriting in London were making preliminary assessments as to insurers’ exposure to the devastation. As a political risk underwriter, James is not usually concerned with natural disasters, but most underwriters do not underwrite just one form of risk, and the earthquake follows a recent spate of natural disasters in Australia and New Zealand as well as the political and social unrest that continues to unfold across North Africa and the Middle East.

It is the latter that most concerns James, as events in the past few weeks highlight the increased potential for political risk spanning a number of countries across the region. Political risk runs the gamut from violence and war to riots, strikes, sovereign nonpayment and currency inconvertibility. Julie Martin, senior vice president of the political risk and structured trade credit practice at insurance broker Marsh, has observed political risk in many guises throughout her 30-year career as an underwriter and broker, but in contrast with other forms of insurance, she says, there are no good actuarial models for political risk.

So what did insurers make of the events that continue to unfold in the Middle East and North Africa? “I was surprised by the timing and abruptness of it,” says Martin, “but no one who follows political risk would be surprised when things like that happen. When you have a dictator running a country, at some point there may be a revolution, leaving a power vacuum.” Not many companies that do business in the region, however, take a medium-to-long-term view of the potential risks, she says. “Companies operating in these countries generally have a short-term view and feel that as long as the status quo remains, things will be okay,” says Martin. “I don’t know how much scenario analysis and planning really gets done by these companies, and larger companies sometimes decide that they can absorb the risk on their balance sheet. They may de facto opt to assume risk without having done a thorough analysis of it.”

James says a lot of work has been done in the past two decades by the insurance sector on contagion and the impact of multicountry events. “These are the types of scenarios we have looked at in the past in terms of the possibility of contagion from Israel spilling over into Gulf countries, albeit focusing more on [the risk of conflict] rather than regime change.” One of the things about political risk is that you have to be able to look at it over the medium term, James explains. In the past 10 years, he says, conditions for political risk have been relatively benign. “Generally, the world has been a safe place, but if you look at what is happening in the Middle East in the wider context, even though we do not try to predict events, you try to model your own exposures to make sure you have managed your downside.” James says Ascot is comfortable with the level of exposure it has to major oil-producing countries in the Middle East and that so far it has had only a couple of precautionary notifications from clients with assets in Egypt. “We still expect our political risk book to be profitable this year,” says James.

Insurers reported an increase in the number of firms inquiring about political risk insurance following recent events in the Middle East. “There is a flurry of activity as companies try to figure out if they have coverage and the kind of coverage available,” Martin explains. “We have got some clients who are longtime buyers of political risk insurance, who are concerned that they may have more assets in these countries than they initially realized,” says James. In places such as Libya, he says, the oil services sector is likely to be the hardest hit, but companies that are only now considering political risk insurance may be coming too late to the market. It is also difficult to get surveyors and loss adjusters into abandoned oil facilities, which makes it virtually impossible for insurers to assess values or the level of damage. “In some countries in the region it is going to be difficult for anyone to take a 12-month view at the moment because of the ongoing changes,” James explains. “This will prove especially challenging in construction or on large infrastructure investments, where companies should be buying insurance with periods of three to five years or longer.”

Insurers are also concerned about the potential for risk to spread to other major oil producing countries. In terms of the types of risks companies face in these countries, Martin says political violence can lead to other forms of political risk, including expropriation. “If companies entered into joint ventures with [local firms] that are now unfavored, they could experience adverse government action. Additionally, if the country starts hemorrhaging hard currency as companies and individuals move money offshore, a typical government reaction is to impose FX restrictions, resulting in an inability to convert local currency or transfer converted funds out of the country,” she explains. She adds that a number of companies are also assessing whether terrorism coverage is sufficient. “The issue is whether they require broader political violence coverage, as terrorism insurance excludes coverage for revolution, insurrection and civil war.”

Political risk insurance is often perceived as being expensive but, James says, risk insurance loss ratios from the past five years suggest premiums were too low. He says underwriters that also cover credit risk experienced loss ratios of 400% to 500% in the wake of the credit crunch, and that political risk cannot be viewed in isolation as most underwriters underwrite both forms of risk.

Even before social and political unrest swept across North Africa and the Middle East, Aon’s 2011 Political Risk Map, which was published in January, highlighted the increased threat. The map measures levels of political risk—which may result in currency inconvertibility, strikes, riots, civil war or supply chain disruption—across more than 200 countries and territories, ranking countries on a six-point scale from low risk to very high risk. According to the 2011 map, the level of political risk increased in more countries than it declined, having risen in countries such as Kenya, Mozambique, Rwanda, Uganda, Zambia, Panama, Georgia, Uzbekistan, Indonesia, Malaysia and India. In terms of the risk of civil war or insurrection, Aon included an additional five countries this year—Madagascar, Niger, Venezuela, Kyrgyzstan and Thailand. Highlighting the difficulty of predicting where risk would become reality, though, the map pegged the risk level in Tunisia as medium-low and in Egypt and Libya as medium. It did, however, note that the principal concern in Tunisia was civil disturbance.