The European Central Bank sent a shockwave through global fixed-income markets last month with its “strong vigilance” alert, signaling that it was about to raise interest rates to ensure that high oil and food prices don’t become entrenched in the economy. 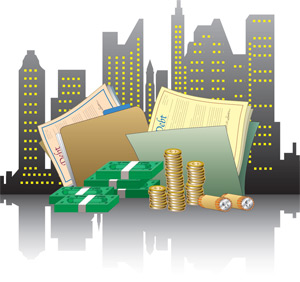 Economists say the ECB has begun a campaign against inflation and that it is difficult to predict the extent of future rate hikes. No one knows, for example, how high oil prices might go or how long they might stay at lofty levels.

Following two years of pocketing record gains, bond investors are becoming more selective about the types of bonds they buy and the credit-worthiness of the issuers. “We have seen increased idiosyncratic activity, particularly in the high-yield market,” says Sherif Hamid, London-based European credit strategist at Barclays Capital. “We believe credit-picking will increase in importance for credit investors in our market.”

If large oil-exporting countries of the Middle East and North Africa, as well as Nigeria, are seriously affected by political turmoil, there could be significant global economic consequences in terms of slower growth and higher inflation, according to economists at Barclays Capital.

“Overall, we remain tactically cautious on European markets, with geopolitical, sovereign, financial and policy overhangs,” Hamid says. “We believe investors would be well served to remain patient and to await further clarity.”

An oil price shock could further divide the ECB and the US Federal Reserve, says Luca Ricci, New York–based head of international economic research at Barclays Capital. The Fed is more likely to worry that higher oil prices will be a de facto tax on the consumer and that they will dampen economic activity and cause unemployment to increase. The ECB is more focused on the inflationary fallout, according to Ricci, who suggested in a recent report that the ECB and the Fed are living on different planets.

Record oil prices of $145 a barrel, which were reached in July 2008, are not unthinkable, according to economists at Barclays Capital, and could have serious consequences. “In our view, the oil price increase in 2008 significantly contributed to the recession and the financial crisis in the US, which then spread globally,” Ricci says. “By raising consumer price inflation, the oil price rise reduced real disposable incomes and, hence, the purchasing power of the average household, leading to a contraction in consumer spending and lowering the ability to repay the mortgage.”

There is limited room for policymakers in advanced economies to respond to additional sizable shocks, Ricci says. “Therefore, it will be imperative for policymakers to retain their credibility,” he says. “The experience of the 1970s shows [that] if policymakers lose credibility, the consequences of a supply shock can become disastrous by entrenching inflationary expectations.”

Overall, corporate bond issuance in the US market remained very active in the first two months of 2011. “This year started out very strong, despite the turmoil in the Middle East, winter storms [in the US] and rising oil prices,” says Benjamin Streed, Florida-based fixed-income trader at Raymond James Financial. The $270 billion raised in the year-to-date period through March 3 even surpassed pre-crisis levels, he says.

While investment-grade corporate bond issues continue to flood the market as companies seek to take advantage of low interest rates, there has been some slowing in the high-yield sector of the market recently. According to KDP Investment Advisers, based in Montpelier, Vermont, the volume of new issuance in the US high-yield market fell by nearly $10 billion in February from a month earlier. Still, there were seven high-yield bond offerings in February of $1 billion or more each.

Del Monte Foods sold $1.3 billion of eight-year senior notes, as part of a $4.75 billion debt offering to fund its leveraged buyout by a group of private equity firms led by Kohlberg Kravis Roberts. The notes were sold at a risk premium of 464 basis points above similar maturity US treasuries. Del Monte has become a pet-foods producer known for such brands as Kibbles ’n Bits and Meow Mix, although it still makes processed foods and beverages for humans. KKR, Bank of America Merrill Lynch, Morgan Stanley, Barclays Capital and J.P. Morgan were joint bookrunners of the offering. 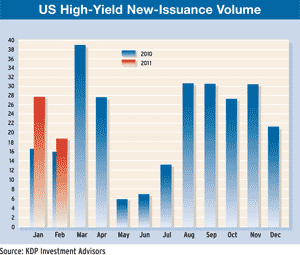 Auto-financing companies were big issuers of high-yield bonds in February, continuing a trend from last year. Ally Financial sold a total of $2.25 billion in a two-part offering that included $1.25 billion of floating-rate notes. Such notes have been popular lately with investors, who are increasingly concerned about a possible rise in interest rates.

The issue was Ally Financial’s first since November. Barclays Capital, Citi, Goldman Sachs and RBS were the joint bookrunners. On March 7 the US Treasury Department sold a $2.7 billion portion of its holding in Ally Financial, the former lending arm of General Motors that had been known as GMAC. The US government invested $17.2 billion in the auto-financing company during the financial crisis. US taxpayers still own 74% of the company.

John Lonski, chief economist at Moody’s Investors Service’s capital market research group, says higher oil prices have had a limited impact on the credit markets, at least so far, but if benchmark West Texas Intermediate crude oil prices were to rise to the $120-a-barrel level or higher for a protracted period, it could cause the high-yield bond spread to widen, he says.

However, there is always the possibility that support to the economy flowing from a very accommodative monetary policy and previously enacted fiscal stimuli will offset much of the drag from higher energy costs, Lonski says. “Moreover, we doubt that the latest energy price surge will spark a prolonged climb by price inflation,” he says. “Mostly because of sluggish income growth, sharply higher energy costs are more likely to curb consumer spending than to fan price growth in general.”

Overall corporate bond issuance in the US, including investment-grade and high-yield bonds, was 16% higher in the first two months of this year than in the same period a year earlier, according to a report from Moody’s Analytics. It attributes the higher issuance to the attractiveness of corporate debt yields for investors compared with the low returns on treasuries. 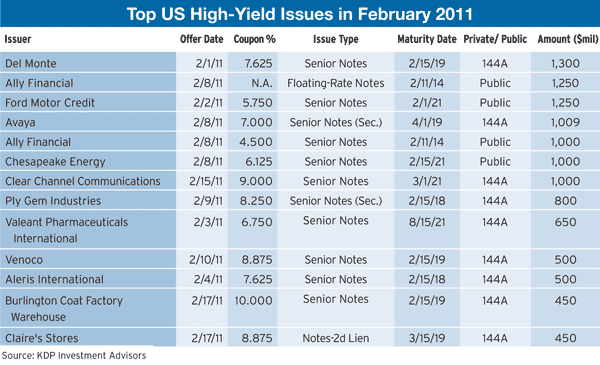