Nashville, Tennessee–based hospital operator HCA Holdings sold more shares than planned in its initial public offering in March, and it sold them at the high end of the expected price range.

What made the $3.8 billion offering unique, however, was that it was the biggest IPO ever by a company backed by private equity firms. The success of the HCA sale is likely to trigger a wave of IPOs by private equity firms seeking to cash out on investments made in 2006 and 2007 before the stock market fell sharply. The HCA offering was led by Bank of America Merrill Lynch, Citi and J.P. Morgan.

Already this year, Kinder Morgan, one of the largest pipeline companies in the US, has come to market with a $2.9 billion IPO, which was the previous record holder for private-equity-backed deals. Nielsen Holdings, which measures television audiences, rose 8.7% in the debut of its $1.9 billion IPO on the New York Stock Exchange in late January.

The next private-equity-backed IPO out of the gate could be for Toys “R” Us. The New Jersey–based retailer filed for an $800 million IPO last May, but the proposed offering was delayed pending an improvement in market conditions. Toys “R” Us was taken private in 2005 by Kohlberg Kravis Roberts, Bain Capital and Vornado Realty Trust in a $6.6 billion deal.

There have been 27 IPOs of $100 million or more priced globally in the year to date through March 10, and 25 of them were in the US, according to Renaissance Capital, based in Greenwich, Connecticut. The $11.8 billion in proceeds from the US-issued IPOs was up 362% from the same period last year. Including HCA, there have been eight healthcare IPOs this year, more than for any other sector.

“The shortage of exit routes, the lack of capital-raising and the numerous listing postponements since the financial crisis began in 2007 have created a growing IPO pipeline worldwide,” says Gregory K. Ericksen, global vice chair for strategic growth markets at Ernst & Young. “The secondary-market momentum is also expected to continue as companies ramp up their capitalization to record levels, particularly to support acquisitions.”

In its global IPO trends report released in March, Ernst & Young says privatizations are likely to be a key driver for the rest of 2011. Investors seeking to capitalize on the emerging-markets growth story have been fueling stock-market rallies worldwide, it says. Privatizations, multinational spin-offs, and demand for companies in natural resources, infrastructure and technology sectors are creating a high level of IPO activity.

“Reflecting growing investor confidence around equity valuations and sharpened risk appetites, IPOs are expected in an even greater variety of sectors and geographies, not just in the Bric [Brazil, Russia, India and China] countries, but also other emerging markets, such as in Southeast Asia, Eastern Europe and Latin America,” Ericksen says.

Greater China looks set to continue its leadership of IPO markets this year, according to Ernst & Young. As the only Chinese stock exchange fully open to foreign investors, the Hong Kong Exchange has become a platform for China-based companies that want to expand internationally and seek access to global funds, Ericksen says.

About 150 companies in the US pipeline are expected to raise about $42 billion, Ernst & Young says. This includes private-equity-backed companies; fast-growth companies in technology, healthcare and real estate; large company spin-offs; and companies backed by funds from the US Treasury. 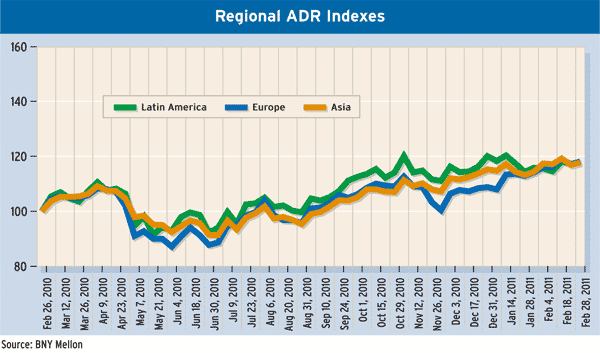