Issuance of high-grade US corporate bonds soared to $99 billion in February.

Issuance of high-grade corporate bonds in the US market soared to a monthly record high of $99 billion in February, according to Dealogic, while high-yield debt placements and public offerings also climbed to near-record highs.Still, the new issuance may not be enough to satisfy growing investor demand for corporate debt, which provides a higher return than US Treasury securities.

The stampede to issue bonds continued into early March, as companies rushed to take advantage of low interest rates and narrow spreads, amid signs of an improving US economy. March 5 set a record high for total bond issuance in a single day of $24.7 billion, including high-grade, high-yield and covered bonds.

Despite the heavy issuance, there are not enough corporate bonds to meet investor demand, because the amount of securities that have matured this year is greater than the amount of new issues that have come to market, according to a report by Citi analysts in London. Inflows into bond funds are the highest in two years, according to the report.

"The real story is that there simply is not enough paper around to satisfy real money demand," Citi credit analyst Hans Lorenzen wrote in the report. "Against such a skewed supply-demand balance, it will take a lot of bad news to prevent spreads from tightening further. An expanding pool of money seeking a shrinking investable universe does suggest the market could be more resilient than people give it credit for in their lack of fundamental conviction," he says.

Global issuance of high-yield bonds in the first two months of this year totaled $73 billion, about $8 billion ahead of last year, according to Dealogic. US high-yield new-issuance volume totaled $37.2 billion in February, up from $20.9 billion in January, and the highest since $38.1 billion in May 2011, according to KDP Investment Advisors. The record month for US high-yield corporate bond issuance was March 2010—with $39 billion.

Bond yields are near record lows, as the Federal Reserve plans to keep the federal funds rate at an exceptionally low level at least through late 2014, and the European Central Bank has flooded the banking system with cheap three-year loans.

Meanwhile, corporations are seeking to borrow as much as they can to take advantage of low interest rates to refinance outstanding debt and to finance acquisitions.

Among the largest issuers of high-yield bonds in the US market in February, Samson Investment sold $2.3 billion of senior notes to back the buyout of the oil and gas exploration company last year by an investor group led by KKR.

Clear Channel Worldwide, controlled by Bain Capital and Thomas H. Lee Partners, raised $2.2 billion of bonds to help trim debt at the company, the world's biggest billboard firm, which was the target of a leveraged buyout in 2008. The company increased the size of the offering from $1.3 billion in the face of strong investor demand. 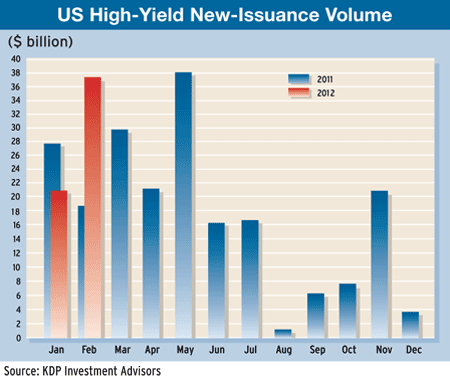 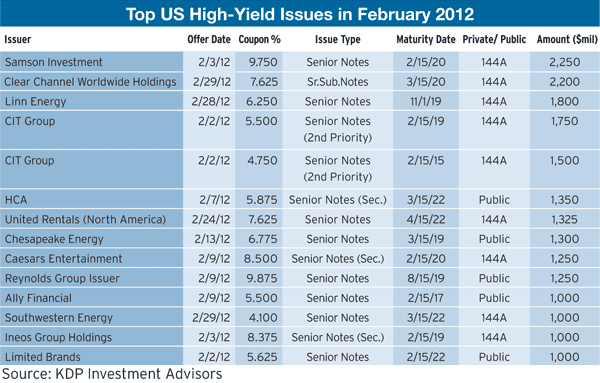