Facebook prepares for its initial public offering that it hopes could raise $10 billion.

Facebook added 25 new underwriters to its original group of six, as it prepared for its initial public offering that it hopes could raise $10 billion and value the social networking company at $100 billion. That would make it the larg-est Internet IPO ever.

The technology sector has been the major driver of IPO activity this year, as it was in 2011, despite the fact that the tech sector is expected to cool somewhat early in the year. Yelp was the opening act for Facebook in March, as its shares soared 64% in their first day of trading on the New York Stock Exchange. Goldman Sachs, Citi and Jefferies handled the stock offering.

San Francisco–based Yelp, which has been operating for more than seven years, offering online reviews of restaurants, shopping and entertainment, raised about $107 million, valuing the company at about $1.4 billion. For the full year 2011, Yelp lost $16.7 million against $83 million of revenue taken in, mainly from selling advertising. Yelp turned down a $500 million takeover offer from Google in 2009.

There were 38 technology IPOs last year, accounting for 28% of overall IPO activity, according to a review by PwC. The technology and energy sectors have demonstrated consistent growth in new offerings in the past three years, PwC says.

The biggest technology IPO worldwide last year was the $1.3 billion offering by Yandex, owner of Russia's most popular Internet search engine. The company's shares jumped 55% in their debut last May on the Nasdaq Stock Market.

Facebook chose Morgan Stanley as the lead underwriter on its listing, which is expected in May. Morgan Stanley led IPOs by Yandex, LinkedIn, Groupon and Zynga last year.

CEO Mark Zuckerberg will retain about 57% of the voting power in Facebook by retaining 28% of the company's shares. The social media firm generated $3.7 billion in revenue last year. Its IPO could make Zuckerberg's holdings worth more than $28 billion. Facebook has 845 million monthly active users worldwide and gets more than half of its revenue from the US and Canada—despite having less than a quarter of monthly active users based in North America. It is experiencing fast growth in such countries as India and Brazil, however, where it is stepping up its promotional efforts. The company said it had 432 million mobile monthly active service users worldwide at the end of 2011, an increase of 76% from a year earlier.

Fortescue Metals, one of Australia's largest producers and seaborne traders of iron ore, named Citi as depository for its sponsored Level 1 ADR program. The shares will trade in the over-the-counter market. Each ADR represents two ordinary shares.

In Hong Kong the first major IPO of the year had a weak debut. Sunshine Oilsands, a Canadian company backed by Chinese state-owned enterprises, raised about $580 million. The shares were priced at the bottom of an expected range and fell 3.1% in their first day of trading. However, the IPO pipeline in Hong Kong could reach nearly $8.4 billion in the first half of 2012, according to Thomson Reuters. 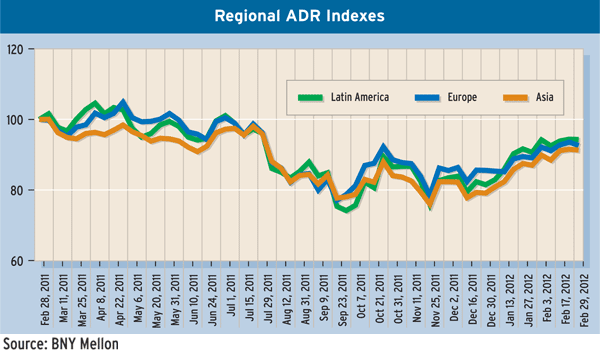