The foreign exchange market continues to be rattled by Europe's debt crisis, analysts say the issue is far from settled.

The foreign exchange market continues to be rattled by Europe's debt crisis, analysts say the issue is far from settled. Uncertainty about the Greek bond swap, worries about Spain's defying the European Union over its deficit rule, and suggestions that Portugal is next in line for a second-round bailout stopped the euro's rally in its tracks last month.

Equity markets initially rose, then gave back most of their gains on news that the European Central Bank had allotted about €530 billion ($700 billion) in three-year loans to eurozone banks in its second long-term refinance operation, or LTRO, at the end of February. The take-up was higher than the approximately $650 billion allotted in the first LTRO last December, and the number of bidders rose to 800 from 523.

The initial reaction of market participants was to buy into riskier trades, says Dean Popplewell, chief currency strategist at Oanda, which provides Internet-based foreign exchange trading and currency information services. "However, if one looked critically at the uptake in the second LTRO, the fact that European banks borrowed more than expected did not necessarily mean that they were going to invest in European equities or sovereign debt," he says. Perhaps they would invest in US equities, which would result in a higher dollar and a weaker euro.

Why were European banks so eager for funding? "A contrarian will tell you that this higher-than-expected demand may also signal that banks expect funding stress to continue," Popplewell says.

The LTRO does constitute an easing of monetary conditions, according to analysts at Barclays Capital. A weaker euro against the majors is, therefore, likely now, they say.

The initial market reaction was very muted, which was not surprising, since the outcome was only modestly above a fairly wide-ranging consensus.

Although the first round of the LTRO last December was certainly perceived as beneficial to the banking system, since these measures reduce funding risk, they do not reduce uncertainties about the underlying asset: European sovereign bonds, according to Barclays Capital.

The fact that more banks participated in the second round of the LTRO is not surprising, since the relaxed collateral rules in seven countries, including Spain and Italy, were designed to help smaller institutions, says Marc Chandler, global head of currency strategy at Brown Brothers Harriman in New York. The larger number of banks participating in the second round also lowered the average takedown, he notes.

"Banks do not seem to be borrowing only to cover this year's funding needs," Chandler says. "It is three-year money, after all, although there is the option to return the money after one year."

Spanish and Italian banks appear to have increased the percentage of assets invested in their own sovereign bonds after the first round of LTRO, Chandler says. "This is a type of low-risk carry trade, which is not always picking up pennies in front of a steamroller, as it is often depicted," he says.

Traders should not have expected the markets to respond to the second LTRO round the same as the first, Chandler says. "When a central bank begins an easing cycle, the market's response is typically different than when the market believes it is the last move," he says.

"Portugal is next and, although the credit dynamics and implementation of reforms is superior [in Portugal] than in Greece, the risk remains high that it will need a second aid package or debt restructuring, as it is unlikely to be able to return to the capital markets in the second half of 2013," Chandler says.

Meanwhile, developments in Spain are particularly troubling, he adds. "The new fiscal compact had just been signed, which includes somewhat more rigorous fiscal rules and enforcement, when Spain's prime minister [Mariano] Rajoy revealed that this year's deficit would come in around 5.8% of gross domestic product, rather than the 4.4% target," Chandler says. The problem for Spain, he says, is that the target was based on a forecast of 2% GDP growth this year, whereas the International Monetary Fund now expects a 1.7% contraction.

John Hardy, head of foreign exchange strategy at SaxoBank in Copenhagen, says recent weakness in the euro is a test of whether the bias of market participants is shifting to the downside. "The LTRO is out of the way, and the focus is shifting to whether Portugal becomes the next Greece, and on German politics and the country's stance on bailouts," he says.

In Asia, with Japanese consumer price inflation running at slightly deflationary levels, the Bank of Japan could move forcefully again to bring inflation into positive territory, Hardy says. "Meanwhile, oil is also a factor, as Japan's dependence on energy imports—particularly from the Persian Gulf region—is notable," he says.

Wen told the country's top legislature that China aims to increase the volume of China's total exports and imports by about 10% this year and hold the increase in the consumer price index to around 4%, unchanged from last year.

Meanwhile, People's Bank of China governor Zhou Xiaochuan said China could appropriately widen its currency's trading band. The central bank's announcement, combined with the lower growth forecast, could lessen pressure on China to allow the renminbi to appreciate, analysts say. The central bank has been buying dollars to slow its rise.

Zhou said the renminbi has gradually met the requirements to become more of a floating currency. He said the Chinese currency is now moving very close to a balanced level. The renminbi has appreciated by more than 30% since the Chinese government abandoned a peg to the dollar in July 2005.

Under current rules, the People's Bank of China announces a central parity for the renminbi against a basket of nine other currencies every trading day and allows it to strengthen or weaken by 0.5% from the central rate every day. 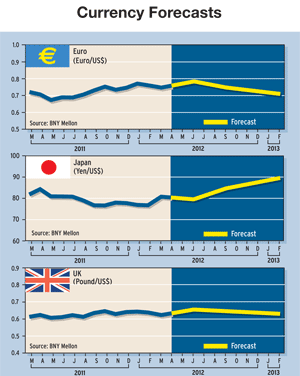 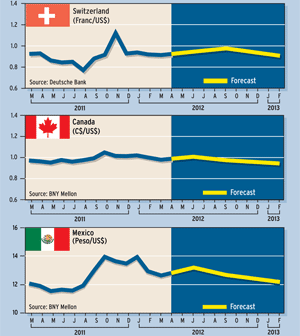 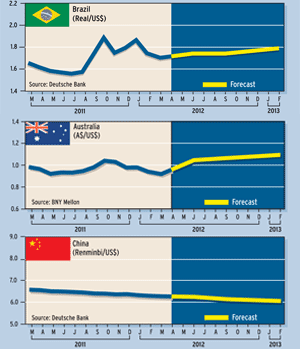 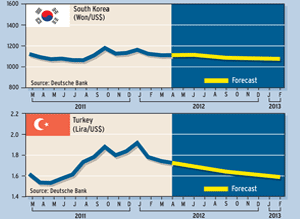