FAITH IN THE DOLLAR PEG

Global Finance sits down with Qatar’s central bank governor, sheikh Abdullah Bin Saud Al-Thani. The pegged-exchange-rate regime is working well, according to Al-Thani, and the resilient financial sector will help Doha to develop as a financial hub. 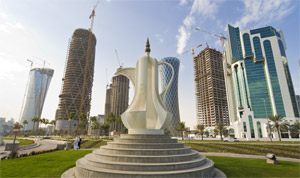 Global Finance: Monetary union in the Gulf Cooperation Council, if achieved, would deprive the Qatar central bank of independence and policy tools to guide the economy. Is it worth it to continue the riyal’s peg to the dollar until GCC monetary union?

Al-Thani: Qatar’s decision to keep its exchange rate pegged to the dollar is based on key considerations that encompass the economic realities of the country, the state of development of the financial markets, and several other factors. There are several advantages in maintaining the dollar peg, which is preferred by most oil exporters. First, the fixed exchange rate [to the dollar] provides a credible anchor for monetary policy, as almost all of Qatar’s export contracts and invoicing are done in dollars. Thus, a stable exchange rate renders stability to our foreign export earnings, the main component of government revenue. Second, for most of the period for which the peg has been maintained, the Qatari economy has benefited from the stable economic environment in the US. Third, fixed exchange rates are much easier to monitor in the absence of exchange-rate risk. The absence of developed and robust financial markets precludes the development of adequate risk-hedging instruments needed in a floating exchange-rate regime.

Despite these obvious benefits, there are some challenges while operating under fixed exchange rates. With the fixed anchor, we have to maintain policy [relatively] consistent with that of the US. [But this] may not always be justified based on our own domestic considerations, [so] we have demonstrated some independence of policy in light of our own economic imperatives.

For instance, we changed our policy stance to further easing in 2010 and 2011, while the US continued with the pause on policy rates. We continue [to have] faith in the pegged exchange rate regime after carefully weighing the benefits against the costs. Nevertheless, we will continue to review the situation in light of evolving international and domestic macroeconomic developments. 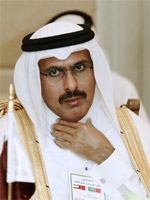 "Qatar’s decision to keep its exchange rate pegged to the dollar is based on key considerations that encompass the economic realities of the country, the state of develop-ment of the financial markets, and several other factors"

GF: Bank lending to the real estate sector in Qatar rose sharply last year. Will we continue to see such fast rates of growth in lending to the property market ahead of the 2022 FIFA World Cup?

Al-Thani: Overall credit growth during 2011 was 28.2%, driven primarily by public-sector credit expansion. The two major drivers of private credit—real estate (including contractors) and consumption—recorded growth rates of around 33% and 20%, respectively.

In future, a significant amount of private participation will be required in the run-up to the World Cup. Therefore, with project financing opportunities coming up, along with infrastructure investment, credit demand is likely to improve over the medium term. Under these circumstances the role of the government would be to provide an enabling economic environment for the private sector to grow and prosper, in line with our National Vision (a long-term national economic blueprint, framed in 2008, for an advanced, self-sustaining society).

GF: According to the IMF, Qatar’s projected GDP growth for 2012 is 6%. That will feel like a sharp deceleration from nearly 20% growth last year. Are you planning a smoothing policy?

Al-Thani: The projected deceleration in GDP growth to 6% in 2012 by the IMF is over the base of 2011, which has experienced high growth. This deceleration is premised on significant moderation of real hydrocarbon GDP growth on account of the self-imposed moratorium on hydrocarbon production, which would keep LNG production capped at 77 million metric tons. Large infrastructure investment and increased production in the manufacturing sector, however, will maintain real non-hydrocarbon growth at 9% in 2012.

In this regard, it has been our endeavor to gradually reduce Qatar’s reliance on the hydrocarbon sector by diversification into other sectors and reinforcing competitiveness. This will necessitate raising productivity through greater use of the latest technologies, increasing the efficiency of investments, fostering more openness to foreign competition, and enhancing the quality of labor. This has been articulated in the government’s national development strategy for 2011–2016. From the central bank’s perspective, we are fully supportive of this process of diversification by ensuring adequate flow of credit to the productive sectors of the economy.

GF: What is your vision of the role of Doha as a regional and international financial center? Will its specialty be in wealth management, insurance or something else?

Al-Thani: Qatar is one of the few Gulf countries able to successfully withstand the global financial crisis. With its vision of becoming a world-class investment destination, Qatar has been improving its economic and financial infrastructure. The Qatar Exchange has entered into a strategic partnership with the New York Stock Exchange in order to become a preferred choice for investors. Efforts are also ongoing to list small and medium enterprises on the stock market. This will further boost the diversification efforts of our economy.

Further, a process of unification of the regulatory bodies is under way, which will enable us to address the regulatory gaps and overlaps. We hope to develop a robust and resilient financial sector that will cater to the diverse requirements of investors across various asset classes.

GF: Is Qatar’s banking system capable of financing the $100 billion worth of projects in the country’s 2030 Vision?

Al-Thani: The banking system is well capitalized, profitable and has low levels of delinquent loans. The banks have been continuously improving their outreach by expanding beyond national borders. At the same time, banks have been taking proactive steps to improve their risk-management skills in order to cope with the challenges of financing large-scale projects. From our side, we have been continuously fine-tuning our regulatory and supervisory framework with a macro-prudential focus to comprehensively monitor and manage risks.