Business leaders, policymakers and development experts will gather in Manila the first week of May at the Asian Development Bank's (ADB) 45th Annual Meeting of the Governors. 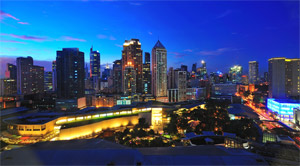 At last year’s Annual Asian Development Bank meeting, members outlined two scenarios for Asia in the coming decades. In the first Asia continues its rapid economic transition, creating billions of middle-class citizens and boosting its share of global GDP to 52% by 2050, almost double its current level. In the second scenario Asia becomes stuck in a “middle-income trap,” with wage levels stalling, good job opportunities plateauing and billions of Asians deprived of middle-class status. This year’s presentations will set out several topics that the ADB believes will be essential for ensuring the realization of the first scenario.

TOP PRIORITIES
Natural resources and environmental issues are among the top priorities. Water management will be discussed during one session, as the ADB offers strategies for coping with the demands of growing populations and changing environmental conditions. Although most countries have policies to ensure affordable water for their poorer citizens, the benefits of those policies do not always reach the intended recipients. The session will examine a number of strategies to minimize waste and respond to weather conditions while ensuring safe, affordable water supplies throughout the year.

Water management is also important for food production, another topic of discussion at the meeting. According to the ADB, two-thirds of the world’s hungry live in Asia, and food prices have risen significantly since 2004.

Poor families are most vulnerable to such increasing prices, with Asia’s poor already spending more than half of their income on food. The ADB estimates that a 10% increase in domestic food prices would push more than 64 million people into poverty. Participants will look at what policies governments can pursue to make sure their citizens have enough food and how the ADB can help them.

Climate change is an issue closely linked to food and water supplies and affects quality of living around the world. Although some developed countries have focused on addressing climate change concerns, developing countries sometimes sacrifice environmental action in favor of further economic development.

In a February report, the ADB identifies opportunities for Asia to grow economically in an environmentally responsible way by embracing the development of green technologies. The report offers suggestions ranging from voluntary carbon reduction targets to better energy and fuel efficiency requirements, and participants will discuss these policy options at the annual meeting.

ENCOURAGING PRIVATE INVESTMENT
An important element in environmental policy and social development is private sector participation, another important topic at the upcoming meeting. The World Bank and the ADB have identified public-private partnerships (PPPs) as essential ingredients for developing infrastructure, but the number of developing countries with new infrastructure PPP projects fell in the first half of 2011 to its lowest level since the early 1990s. Concerns over transparency and consistency in policy have dampened interest in such projects. At the same time, the importance of private sector investment increases as public funding constraints tighten.

“With these weakening economic conditions, developing countries have less fiscal and monetary space for remedial measures than they did in 2008–2009. They need to prepare for the possibility of sources of financing drying up while creating the optimal business conditions for delivery of their infrastructure programs,” says Clive Harris, manager for Public-Private Partnerships at the World Bank Institute, in a recent press release.

Public funding is not the only area where finances are tight. The ADB conference will host a session on expanding reliable banking services to all income groups across Asia. For poorer populations, building savings and accessing credit are important avenues for increasing wealth. The principle extends beyond microbanking to include lending to small and medium-size companies. Currently, with banks focused on larger companies and higher-income individuals, smaller companies and poorer individuals have limited access to reliable banking channels.

Expanding access to banking services is important not only for reducing poverty but for encouraging ingenuity and efficiency within the economy. More domestic innovation and well-funded small companies will help Asia to reduce its current dependence on Western export markets, an important step toward long-term sustainable growth and the topic of several sessions at the annual meeting. To do this, Asian countries must adjust their economic models to support these individuals and smaller businesses.

HARMONIZING REGULATIONS
Financial integration across borders is an important part of this process as well, according to Paul Gruenwald, Asia-Pacific chief economist for the Australia and New Zealand Banking Group (ANZ). “Trade integration is well advanced in Asia, as evidenced by its sophisticated supply chains, but the harmonization of tax and regulatory regimes, which will spur capital flows across Asia, still needs work. There is large scope for Asia to integrate financially, as there is a need to diversify assets and funding sources and to finance trade flows and production around the region.” ANZ will present on this topic at the conference.

Countries must also balance the service and manufacturing contributors to GDP, which is the topic of another ADB session. In the past, most Asian countries relied on manufacturing to build up the economy first, then began providing services domestically. The Internet and a surge in outsourcing are now allowing some companies to skip the manufacturing stage and provide services directly to more-developed markets. India has been a pioneer in this area, and the Philippines also has benefited greatly. But the ADB warns against relying too heavily on outsourced services because the gains go primarily to the well-educated segment of the population.

CONTINGENCY PLANNING
Finally, participants at the ADB’s conference will also discuss preparations for possible natural disasters and future economic crises. Disaster preparedness has risen on policymakers’ priority lists as several natural disasters have struck Asia in recent years. The focus until now has fallen on post-disaster response rather than effective planning in advance. Although that is now changing, policymakers face significant challenges weighing the need for spending on disaster preparedness against investment in economic development.

Financial safety nets guard against crises of a different nature. Asia was overall better prepared than other regions in the world for the most recent global economic crisis. The experiences of the Asian financial crisis in the late 1990s helped the region in this respect. But the the most recent global economic crisis showed that the world needs safeguards against liquidity shortages. Currently, several organizations and agreements have collected funds for future emergencies, but an international reform of the system may be necessary.

The meeting, then, will cover what Asia needs to do to maintain its economic growth momentum, avoid the middle-income trap and improve the livelihoods of all its residents. Steve Lackey, Asia-Pacific chairman of BNY Mellon, notes: “By funding education, health and human welfare projects, the Asian Development Bank contributes to improving the lives of over 1.8 billion Asian people living in poverty today. In an economic sense they convert these populations into an engine of growth for the region.”

Financing of physical infrastructure projects in the frontier countries of Asia creates the foundation for manufacturing and trade, he notes. “When successful, these policies bring about more inclusive and environmentally stable growth in the region.”