A SECTOR IN TRANSITION

Global investment banks spent the past year adjusting to the new reality of highly regulated markets and below-historical rates of return. 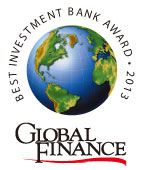 Last year was one of evolution for the world’s investment banks. Having survived a Darwinian struggle for share of dramatically diminished capital markets, they found salvation in the most precious commodity in their industry—loyal clients.

“It was a transitional year when the crisis had ended but things had not fully recovered yet,” says Tom Alonso, head of US banks research at Macquarie Securities in New York. “Now, hopefully, we start to return to a more normalized market.”

As financial regulators from Washington to Basel to Tokyo imposed increasingly stringent rules to stave off another financial crisis, the banks that ended 2012 on top are those that made plans early and acted upon those long-term plans. According to securities analysts, those banks are now the best positioned to perform for their clients in a year that is widely expected to have some of the most dismal investment returns since the crisis.

In debt capital markets, banks that had strong balance sheets had a huge advantage as interest rates fell so low that it was cheaper to borrow than to raise capital on the stock market.

In mergers and acquisitions, those firms that were known for their skills in cobbling together deals under the most trying of circumstances were in their element. The banks that did excel in equity capital markets last year were those that showed entrepreneurial determination, proving it was possible to grow the equity side of their business despite clients’ mad rush to issue bonds—and investors’ insatiable thirst for yield.