Investors have piled into US treasury bonds in recent years to escape such financial scares as the eurozone debt crisis and slowing growth in China.

Analysts warn that the bond rally is nearing an end, however, and that the meager returns from low coupon yields are not compensating for the risk of higher market rates and lower prices.

Nigel Green, CEO of deVere Group, an independent financial advisory firm, says: “Thanks to the Federal Reserve’s bond-buying program, which has held down interest rates, bond investors have enjoyed good returns in recent years. However, while it is expected that the Fed will keep rates near zero until October 2014, it is highly unlikely that interest rates will drop any further, meaning the interest from bonds will be modest to say the least—and that’s being optimistic.”

When rates do go up, bond prices will automatically fall. “Rather than hanging around waiting for their investments to devalue, investors should consider rebalancing their portfolios sooner rather than later,” Green says. “It may be time to take the bull by the horns and consider increasing exposure to well-diversified, higher-risk/higher-return investment opportunities.”

In recent weeks, rates have started rising on blue-chip corporate bond issues. Investment-grade corporates have posted negative returns for the year to date.

Corporate credit and high-yield bonds are somewhat exuberantly and irrationally priced, according to Bill Gross, manager of the world’s biggest bond fund at California-based Pacific Investment Management. “Spreads are tight, corporate profit margins are at record peaks with room to fall, and the economy is still fragile.” 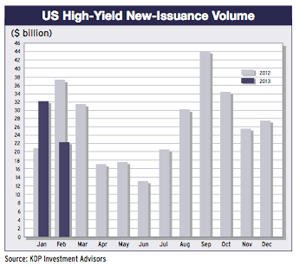 US Fed governor Jeremy Stein warned in a recent speech that some credit markets, including leveraged loans and high-yield bonds, are showing signs of excessive risk taking. “We are seeing a fairly significant pattern of reaching-for-yield behavior emerging in corporate credit,” he said.

A disorderly rotation out of bonds—characterized by higher interest rates and wider credit spreads—is the biggest risk for investment-grade corporate bond investors this year, according to Hans Mikkelsen, credit strategist at Bank of America Merrill Lynch. “However, history offers little guidance about how much of an increase in interest rates would prompt such a disorderly scenario and how it would play out,” he says in a note to clients.

Although corporate bonds have historically been illiquid and difficult to trade, that has changed with the advent of bond funds and exchange-traded funds (ETFs), he notes. “The key problem is that individual investors now have a means to trade illiquid corporate bonds in a much more liquid manner,” Mikkelsen explains. “If we were to experience outflows from bond funds of the magnitude seen in 1994 and 1999, the impact on corporate bonds this time would be much more severe.”

Issuance of high-yield bonds in the US market fell to $22.2 billion in February from $32.1 billion in January, according to KDP Investment Advisors. Most issuance activity was related to refinancing of outstanding issues or financing of mergers and acquisitions. 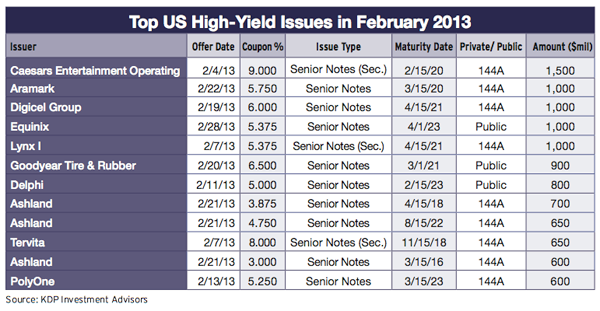