A rising tide lifts all ships, and the bull market in stocks is enabling a number of technology and housing-related companies, particularly in the US, to float initial public offerings.

Total IPO proceeds raised in dollars as of March 7 totaled $13.9 billion, a rise of more than 159% from the same period a year earlier, according to Renaissance Capital, based in Greenwich, Connecticut.

North America represented 41% of global proceeds raised, with the US accounting for $5.3 billion, followed by Germany with $1.6 billion and Singapore and Iraq, with $1.3 billion each. In terms of the number of deals, the US led with 12, followed by Hong Kong with four and Canada with two.

The small Iraq Stock Exchange sprang to life in February, when Asiacell Communications, majority-owned by Qatar Telecom, raised $1.3 billion in the biggest IPO in the Middle East since 2008. Asiacell was required under a provision in its telecom license to list 25% of its shares. Zain Iraq, a unit of Kuwait’s Mobile Telecommunications, and Korek Telecom, part-owned by France Telecom, are expected to list in the next few months. Zain has selected Citi, National Bank of Kuwait and BNP Paribas as advisers for its offering.

The success of the Asiacell IPO was all the more remarkable in that Iraq lacks a comprehensive securities law. Rabee Securities and its affiliate Melak Iraq placed the shares without the benefit of an underwriter by establishing a minimum price and feeding bids into the exchange’s automated order-matching system.

Meanwhile, the Singapore Exchange, which was plagued by $5 billion of IPO cancellations last year, pulled off a $1.3 billion listing in March by Mapletree Greater China Commercial Trust, a real-estate investment trust backed by Singapore’s state-owned investment firm Temasek Holdings. The issue was Singapore’s biggest REIT listing on record. The trust will use the proceeds to purchase the Festival Walk retail and office development in Hong Kong and the Gateway Plaza office building in Beijing.

In the active US market, there were 113 companies in the IPO pipeline in early March looking to raise a total of $31 billion.

ExOne, which makes 3D printers, rose 47% from its offering price in its debut in February for the largest first-day gain of the year to date, according to Renaissance Capital. The company has yet to generate positive cash flow or meaningful profits.

In Zambia the Lusaka Stock Exchange became the first stock exchange in Africa to issue depositary receipts. First Quantum Minerals selected BNY Mellon to be depositary bank for its Zambian DR program. The company’s shares are listed in Toronto and London.

Philip Pascall, chairman and CEO of First Quantum, says: “The listing is in recognition that Zambians are important stakeholders of First Quantum and creates another way for Zambians to identify with and participate in the growth of the company.” 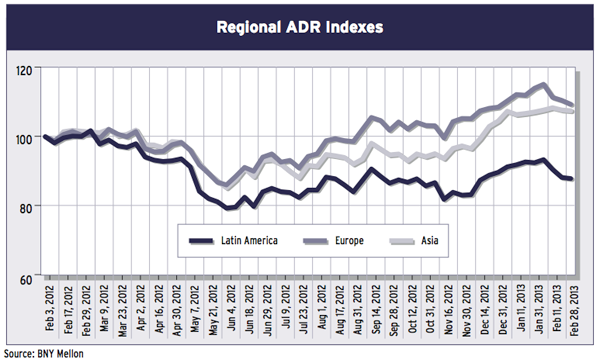