Verizon Communications, which sold $49 billion of debt last September in the largest bond sale ever, has returned to the bond market repeatedly this year to take advantage of low interest rates to refinance outstanding debt. Issuance of investment-grade corporate bonds picked up in early March in a receptive market, as investors sought higher yields than were available on safe-haven Treasury bonds.

Weeks after closing on its $130 billion takeover of Vodafone’s 45% stake in Verizon Wireless, Verizon reentered the US market with a five-part, $4.5 billion bond sale in March. In February, the telecommunications company sold about $5.4 billion worth of debt denominated in euros and British pounds. That sale followed a $500 million bond sale in the US market in January. 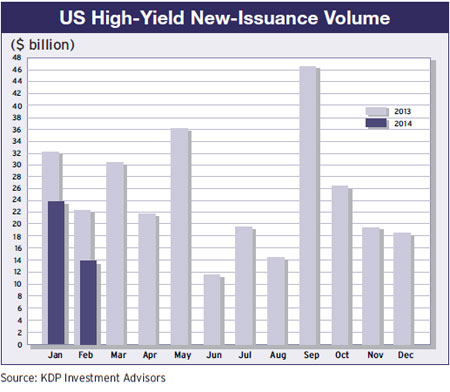 High-yield bond issuance slowed to $13.9 billion in February from $23.8 billion in January, according to KDP Investment Advisors.

Chrysler raised nearly $5 billion in privately placed bonds and loans to pay off United Auto Workers’ VEBA healthcare trust and close out its merger with Fiat.

Chrysler chairman and CEO Sergio Marchionne said in  a statement: “This transaction brings to a successful and earlier-than-anticipated conclusion the process that led to the US and Canadian governments, the UAW and VEBA, together with Fiat, taking on the task of reestablishing Chrysler as a viable automotive enterprise.”

In the public market, CIT, which provides financing and advisory services to small businesses and middle-market companies, sold $1 billion of senior unsecured notes due 2019 at an interest rate of 3.875%. CIT plans to use the proceeds for general corporate purposes.

The US trailing-12-month speculative-grade corporate default rate fell to 1.7% in January from 2.1% in December 2013, according to Standard & Poor’s Global Fixed Income Research.

“The rate in January was the lowest we have seen since March 2008,” says Diane Vazza, head of the S&P research unit. “We had expected this decline, and believe that the rate has now bottomed and will likely increase over the next few months,” she says.

In response to the historically low cost of borrowing across financial markets, prudential regulators have begun to focus on whether low interest rates are encouraging excessive leverage and risk taking—which could unwind when interest rates rise, say European credit analysts at Barclays.

“In our view the risks to nonfinancial balance sheets from higher borrowing costs are overstated,” the Barclays analysts say. “For Europe, in particular, we believe the bigger risk to credit quality is that yields remain low in the context of weak (nominal) growth.”

While European banks have been supported by central bank liquidity provision, non-financials have had to pay up for liquidity, as credit spreads have remained wide relative to the pre-crisis period, Barclays says.

“Most discussions of how company balance sheets will react to higher yields assume an instantaneous jump in debt-servicing costs—but borrowing is fixed-rate for several years,” Barclays says. 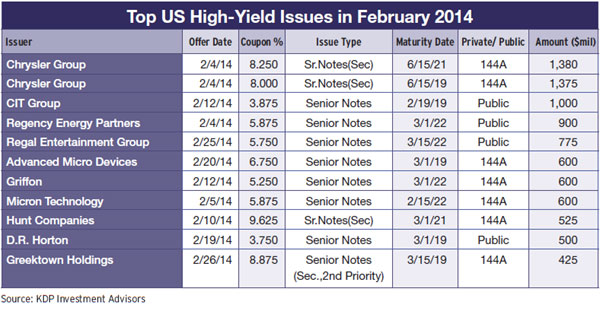