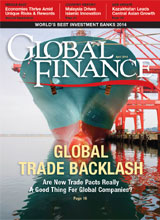 As we write, the Ukrainian crisis is in full swing, and the outcome is impossible to predict. What we have seen so far demonstrates not only the need for global trade treaties but the relevance of trade between sovereign countries. Part of the uncertainty surrounding the Ukrainian crisis stems from the fact that many states in the area depend on imports from and exports to Russia and/or Ukraine. Not surprisingly, their various stands on the crisis are related to their trade volumes.

The timing of our cover story on the pros and cons of the current crop of trade pacts for global multinationals, then, is quite relevant: The current crisis will probably affect negotiations between the US and the European Union, and many Eastern and Central European countries could be forced to reconsider their trade policies and set up a new commercial strategy.

The uncertainty is forcing corporate leaders all over the world to reconsider their priorities in many areas of their supply chain and exports, as well as the wisdom of undertaking joint ventures and making particular acquisitions.

The risks of the current situation are particularly strong on the geopolitical side and will influence any possible outcome of the crisis. Fergus McCormick and Alan Reid of the rating agency DBRS remind us that Russia provides 58% of Ukraine’s natural gas and that 16% of EU gas imports would be affected by any cut of Russian gas transported through Ukraine.

Russia is also the third-largest trading partner of the European Union, with 9.5% of total EU trade—particularly with countries such as the Netherlands, Germany and Italy. The EU also had a trade deficit of more than €90 billion ($125 billion) with Russia in 2013.

Aside from our cover on trade, in this issue we also have some of our most prominent features of the year, including our annual Middle East supplement and the ranking of the best investment banks in the world.