Healthcare companies accounted for more than half of all initial public offerings filed in the US in the first two months of 2014, in a boom fueled by biotech companies, according to analysts at Renaissance Capital. The IPO investment firm says the technology sector is also poised to pick up.

Chinese online retailer JD.com plans a share sale in the US market later this year that could value the company at $20 billion. Technology and biotech companies offer investors high growth and potentially lucrative returns in an otherwise low-yield economic landscape, Renaissance Capital says. Varonis, the only software IPO completed so far this year, doubled from its offering price in its first day of trading. Varonis makes software that analyzes human-generated data.

Most of the tech companies are riding a wave of high growth and now hope to scale up operations by increasing public funds, Renaissance Capital says. Facebook’s $19 billion purchase of WhatsApp, a mobile-messaging service, has also sparked interest in the consumer tech sector.

Pharmaceutical companies seeking to replace expiring drug patents are boosting demand for biotech start-ups, many of which have developed drugs that are in advanced clinical trials. Even those biotechs with drugs that have not yet been tested are attracting investor interest. Dicerna Pharmaceuticals, which has developed an untested drug to treat liver disease and cancers, saw its stock rise 207% in its first day of trading.

The 55 initial filings in the US in January and February—the highest in more than a decade—was up from 21 in the same period a year earlier, according to Renaissance Capital. The healthcare and technology sectors have accounted for about two-thirds of the filings in recent months. The number of IPOs rose to 37 in the first two months of this year from 20 in the same period of 2013. Proceeds rose by a less-impressive 27%, as the average size of the issues was smaller this year.

As of March 10, 2014, there were 52 IPOs priced globally, an increase of 86%. Total proceeds were $23 billion, up 65% from the same period last year. The Asia-Pacific region accounted for more than half of global proceeds for the year to date, although the US raised the most by country.

Chinese companies returned to the US market with more than $900 million of IPOs last year, following a long absence owing to accounting irregularities. JD.com’s offering, expected in the second quarter, would be the biggest ever for a Chinese Internet company.

Tencent Holdings, a gaming and social media company, agreed in March to pay $215 million for a 15% stake in JD.com, China’s second-largest ecommerce provider after Alibaba Group Holding. Tencent also shifted two of its ecommerce companies to JD.com’s site to help it compete with Alibaba. Tencent will use its WeChat mobile-messaging platform to promote JD.com’s services, as well.

JD.com filed for a $1.5 billion US share sale in January. Tencent will take an additional 5% stake in JD.com following the IPO. In another big emerging market, Nigeria’s Seplat Petroleum plans a $500 million IPO on stock exchanges in London and Nigeria in April. Seplat, which purchased three oil blocks from Royal Dutch Shell in 2010, plans to sell a 25% stake in the company, giving it a market value of $2 billion.

Australia-based Primary Health Care named Deutsche Bank as depository for its sponsored Level I ADR program. The company operates a network of medical centers and pathology centers in Australia. 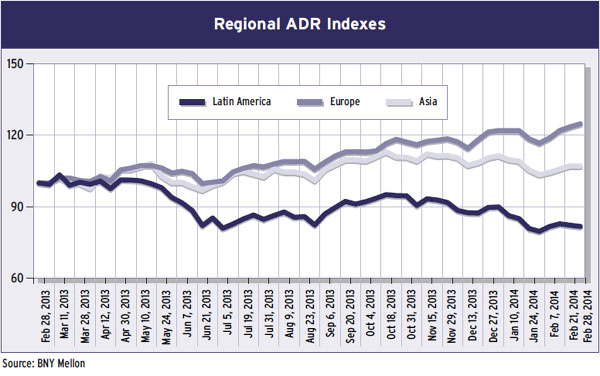